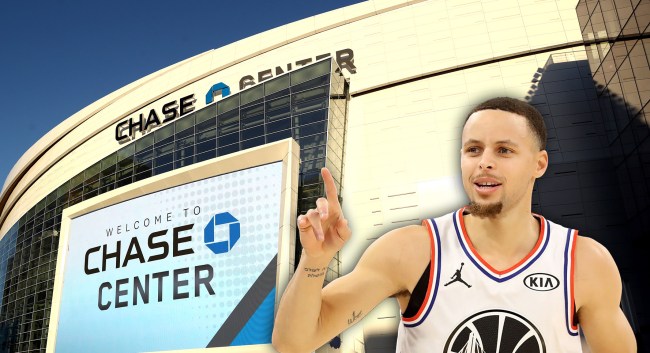 On Thursday, the Golden State Warriors unveiled a new “Oakland Forever” court design, which would be great if the team hadn’t moved to San Francisco so it could make more money.

Naturally, the Warriors quickly got roasted for being so tone deaf with its fanbase.

As you may recall, after 47 years in Oakland, much of it in Oracle Arena, and going to five straight NBA Finals, winning three between 2014 and 2019, the Dubs moved to the Chase Center in San Francisco, but not before the team sued the city of Oakland over an estimated $40 million renovation debt.

If all of this sounds familiar, it’s because it was just a month ago to the day that the Warriors revealed their new “Oakland Forever” uniforms that also made fans of the team very, very angry.

So, since apparently the same person who runs the Sears website also makes decisions for the Warriors, they went ahead and basically did it again.

We called Oakland home for 47 seasons, and it will forever be part of our DNA.

The whole “Oakland Forever” crap is a slap in the face to the city of Oakland. The Warriors never repped Oakland until the Chase Center project got approved, and don’t forget they’re still suing the city of Oakland😂 https://t.co/D3dMq0a8hH

Too bad they couldn’t acknowledge Oakland when they were actually playing in Oakland. Had to leave there first before they would put Oakland on their floor. Makes sense.

Warriors in Oakland: “We’Re GoLdEn StAtE.” Warriors in San Francisco: “Let us not forget where we came from...Oakland.”

Ya ... now you want to rep Oakland! This would be like the OKC Thunder putting Seattle in Supersonics colors on the court. Disrespectful!

“It was a place the Warriors called home for 47 seasons, and even though the team now plays 10 miles to the west, The Town is and will forever be part of the Warriors’ DNA,” reads a release on the team’s website.

“It’s where the league’s most passionate fanbase embraced a franchise. It’s where that franchise won three championships in a span of four seasons, part of five straight trips to the NBA Finals.

“This is for OAKLAND. And this is FOREVER.”

Ummmm you can keep your court, we’ll just take the $40M you owe us. Maybe then the curse can be lifted and y’all can start winning again.

Doors are now open at Warriors Shop at Thrive City!

Don't want to shop in-store but still want your Oakland Forever jersey today? You can shop and purchase via https://t.co/Yn24TpB9n7 for curbside pickup. pic.twitter.com/taz9JVgzdE