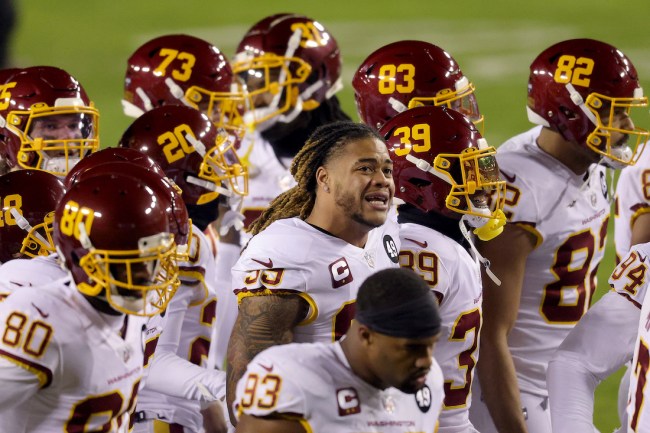 When the Washington Football Team rebranded itself last NFL offseason, it became a huge story that captivated fans from east to west. Not only was one of the most iconic franchises in the league ditching their well-known team name, but people immediately wondered what in the hell might come next, with tons of rumors being thrown out months ago about possible naming options.

While the team’s president, Jason Wright, said a few months back that should the Washington Football Team actually change their name again and reestablish a nickname — which might not be a certainty — he doesn’t want it to be anything “messy or embarrassing.” Here’s what Wright told ESPN‘s Jason Keim in November, 2020 about any decision about a new team name.

“It’s (the Washington Football Team) definitely in the running,” Wright said. “I don’t think anything is off the table… With this one, people are excited about the idea of a club has an identity rooted solely in the area it represents. Maybe it’s Football Team or it’s Football Club. We need to get underneath the why, so no matter what direction we go, we can pull on the heartstrings of folks.”

“The last thing our fan base wants is something messy and embarrassing,” Wright said.

Now, look, that should be obvious, and the franchise should avoid something that might be insulting or degrading to anyone else. But, hey, this is the Washington Football Team we’re talking about, and they’ve been known to be a PR nightmare over the past decade or so. Hopefully that changes as they continue to rebrand.

Although nobody knows for sure what might come next for the WFT, the franchise is rightfully doing its due diligence about possible naming options this NFL offseason. In fact, according to J.P. Finlay of NBC Sports Washington, the organization even sent out a list to fans to choose from. Take a look below at some of the choices, which weren’t all the same for each fan.

More potential name lists for Washington Football Team. Got to say the organization is providing a lot of options pic.twitter.com/PJhta7kvOP

This might just be a little focus group activity that the WFT’s doing right now, but, sheesh, some of those names are ridiculous. The Swifts? The Rubies? The Rising? It’s as if the organization is trying to write a B-level sports movie about a minor league football team that goes from losers to champions — and this would be one of the team names. Awful.

As one might expect, there were lots of opinions on Twitter as this list of names made the rounds, so here’s what a few fans shared on social media.

Just took a survey supplied from @WashingtonNFL pertaining to the name. Not sure if being a STH or media or what but the names I was asked to weigh in on were the following:

I had these options pic.twitter.com/PB1YIgeAlG

This is what I had pic.twitter.com/N4e0ZlKOv4

If anyone voted for the Washington Capital City Football Club, you deserve to lose your NFL fan card. That’s… something. But, hey, these are just options from the Washington Football Team to try and get an idea about what a possible team name change could look like. Let’s wait and see how influential the fan vote really is, and just hope that the franchise doesn’t screw this up and go with something that’s absolutely, well, “messy or embarrassing.”