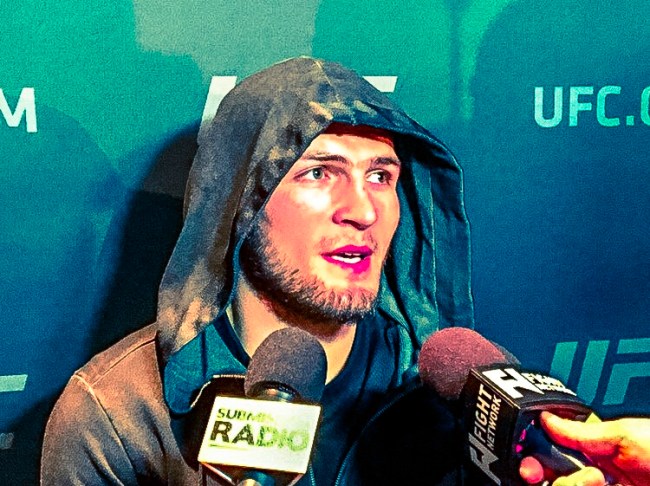 Fire up the coffee and set the alarm clock early because UFC 254 is going live from Fight Island in Abu Dhabi this Saturday, October 24. And, on this very special occasion, the UFC is broadcasting a breakfast special in the form of a world lightweight unification bout between undisputed champion Khabib Nurmagomedov and interim champion Justin Gaethje. No doubt this main event will be one for the ages.

If you’ve paid any attention to the UFC and mixed martial arts in the last five years, then you’re already familiar with Khabib, the undefeated wrestling phenom who famously choked out Conor McGregor at the 2-million-plus selling UFC 229 PPV. At 28-0, Khabib is on an unprecedented run in MMA, but his next opponent, Gaethje may just be his most dangerous.

Gaethje, the challenger and interim champion, is one of the most exciting fighters in the history of the UFC, having won nine fight night bonuses in just seven UFC appearances. His kill-or-be-killed style, which is predicated on forward motion, heavy punches and insanely brutal leg kicks may just give Khabib fits on the feet.

With just a few days to go until Khabib and Gaethje face off in the UFC 254 pay per view main event on ESPN+, it’s time to examine all the biggest storylines from UFC 254.

Where Does Khabib Rank Amongst the Greatest Lightweights of All Time?

Let’s get this out of the way. Khabib Nurmagomedov is the single greatest lightweight MMA fighter in the history of the UFC. Dare to argue otherwise? Try me.

Casual fans will quickly point to Conor McGregor and his UFC 205 champ-champ winning performance against Eddie Alvarez, which was one of the greatest single fight performances in the history of the UFC, but looking at McGregor’s resume as a lightweight, he’s only 1-1 inside the Octagon. That’s hardly an all-time mark.

Longtime fans will consider B.J. Penn, the former two-weight champion who dominated the early days of the lightweight division, setting the divisional mark for title defenses. Penn was an absolute animal, but the twilight of his career, and current seven-fight losing streak make it tough to make a case for a guy with such a drastic decline.

Which brings us to Khabib, all 28 wins, 12 in the UFC, 11 of which have come in the lightweight division.

Khabib has lost just one round in his UFC career, the third round against McGregor at UFC 229, and has otherwise been perfect inside the Octagon. He’s completely mauled every single opponent he’s faced in the UFC, and he continues to look better with every ensuing fight.

Most recently finishing Dustin Poirier via fourth-round rear-naked choke at UFC 242, Khabib has already cemented his place as the greatest lightweight in the history of the UFC, and with a win in the UFC 254 PPV main event on ESPN+, he has a chance to tie Penn and former champ Benson Henderson for the most title defenses in the history of the 155-pound division with three.

Where does Khabib vs. Gaethje Stand in the Pantheon of Lightweight Title Fights?

Given that Khabib is the UFC lightweight G.O.A.T., it’s fair to question if this upcoming title unification bout against Gaethje is the most heavily anticipated and contested fight in the history of the division.

To that end, the answer is no, but Khabib vs. Gaethje is still one hell of a fight worth watching.

Look, when it comes to UFC lightweight title fights, Khabib vs. Conor will always be the gold standard. It’s the highest selling PPV in the history of the UFC, by far, and came with a contentious backstory, where an inebriated McGregor basically insulted the entire population of Dagestan and the Muslim world in order to promote the fight. Gaethje isn’t using those sorts of lowball tactics.

A sportsman, competitor, and fearless warrior, Gaethje has always let his performance inside the Octagon do his talking for him, and his current four fight knockout streak may make him the most dangerous challenger to Khabib’s throne.

Gaethje’s fighting style may be the most fan friendly and aesthetically pleasing style to ever grace the Octagon. With all seven of his UFC fights ending via knockout (two of which were losses), Gaethje is a full on, balls-to-the wall hard charger of an offensive fighter. And, while he’s never even attempted a single takedown in his UFC career, he is an accomplished wrestler, which could give Khabib some issues throughout the fight.

How Will the Loss of His Father Affect Khabib?

From the mountains of Dagestan to UFC champion.

Whether in spirit, or in person, Abdulmanap was in Khabib's corner every step of the way.

"Father's plan" is not finished just yet. The job is not quite done…#UFC254 pic.twitter.com/iAGJJmrtXl

It’s impossible to ignore that a major presence will be missing from Khabib’s corner at UFC 254 after his father Abdulmanap recently died of COVID-related complications.

His head coach, and leader of an entire generation of fighters from Dagestan, Russia, Abdulmanap was more than just Khabib’s father, he was a figurehead for the growth of MMA in one of its more dominant regions. He was an icon and mentor, and now he’s gone.

Without his father, many are speculating how Khabib will perform in the UFC 254 main event, but looking at Nurmagomedov’s UFC career, there’s reason to believe the loss won’t affect him too much. In fact, Abdulmanap only cornered one of Khabib’s UFC fights, unable to travel to the U.S. after his travel visa was repeatedly denied. In Abdulmanap’s stead, American Kickboxing Academy head coach Javier Mendez has cornered Khabib to tremendous success. UFC 254 should be no different.

Will A New Middleweight Challenger Emerge?

While all eyes will be on the UFC 254 PPV main event and Khabib vs. Gaethje, the evening’s co-main event between middleweights Robert Whittaker and Jared Cannonier is an intriguing and important fight, one that could even produce the next challenger for champion Israel “Stylebender” Adesanya.

With Adesanya defending his title at last month’s UFC 253, the champion is in search of his next opponent. Having already defeated Whittaker last year, Adesanya has already expressed an interest to fight Cannonier, but only if he wins decisively.

A former champion, Whittaker represents the biggest challenge that Cannonier has faced at middleweight. Whittaker is adept and refined in every facet of mixed martial arts. He’s an absolute sniper on the feet, with heavy hands and super sharp kickboxing. He’s also a stellar wrestler with plenty of Brazilian Jiu Jitsu skills. He’s the complete package, looking to work his way back to a title shot and a rematch against Adesanya, which makes the UFC 254 PPV co-main event both heavily contested and high level.

It’s tough to predict a winner in this fight, but fans of MMA will no doubt have a chance to witness one of the best middleweight fights of 2020.