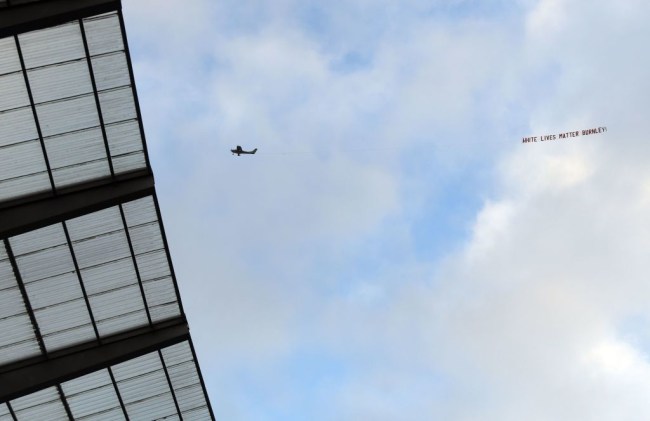 We are living in truly historic times, as mankind finally appears to be reckoning with centuries upon centuries of systemic and blatantly oppressive racism, which is hopefully leading to the disease not only being uprooted in the United States, but across the globe. Unfortunately, similar to the hilariously failed and pathetic Confederacy, the racist scum infesting our planet isn’t going down without a fight.

Whether it be the appearance of Confederate and Nazi flags at “rallies” or the outright brawls started by far-right white supremacists in the heart of London, the racists are making sure to prove to everyone just how truly intolerable they are, with the latest example coming out of England.

According to reports, during the Manchester City vs Burnley game — which is unfolding as I type these words, City currently lead 1-0 in the 40th minute — a plane dragging a banner saying “White lives matter – Burnley” is being flown above the Etihad Stadium as the two Premier League clubs play their match below.

It’s just the latest example of unabashed bigotry and hate from a dying breed that knows they’re on their last legs. There are more of us than there are of them and the numbers are exponentially growing in our favor, and no one can feel the tides of history turning against them more than those who now find themselves firmly on the wrong side of it. Getting rid of these racist piles of garbage won’t be easy, but it’s damn sure going to be worth it. BLACK LIVES MATTER.