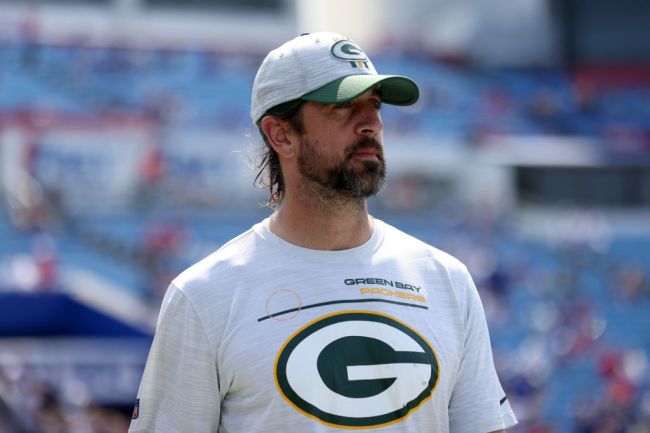 Slowly but surely Aaron Rodgers is starting to speak about all of the drama between himself and the Green Bay Packers’ front office. He made it crystal clear that he wasn’t happy with the Packers and essentially went radio silent this offseason contemplating whether he was going to show up to training camp or continue to hold out.

Rodgers recently admitted that he even contemplated retirement before eventually showing up to camp after signing a restructured deal with the organization. Now that the dust has settled, at least for the time being, the 37-year-old is starting to talk with the media again.

His weekly segment on ‘The Pat McAfee Show‘ has started back up again with the NFL regular season kicking off this week and McAfee asked him about the decision process to go media silent amid all of the drama swirling around his name. Rodgers also shared that he did think about contacting McAfee during the offseason to keep him up to date with things going on.

“It didn’t seem right the entire time because my motivation was never to slam the organization or the fanbase or anybody specifically,” Rodgers said. “I was just in contemplation and wanted to take time to think about where I was at and what I wanted to do. I didn’t want to get into a pissing match. I just wanted it to be cordial. I love the organization and I’ve had a long time being here, and didn’t want to make it play out in public.”

"It didn't seem right the entire time because my motivation was never to slam the organization or the fanbase or anybody specifically..

I was just in contemplation & wanted to take time to think about where I was at"@AaronRodgers12 on staying quiet #PatMcAfeeShowLIVE pic.twitter.com/8gYvpYBwBO

You certainly can’t fault Rodgers for wanting to keep things behind closed doors so to speak, even though that’s essentially impossible in today’s day and age. Nevertheless, the drama seems to be at bay for the time being with Rodgers and the Packers set to open their season up against the Saints on Sunday afternoon.