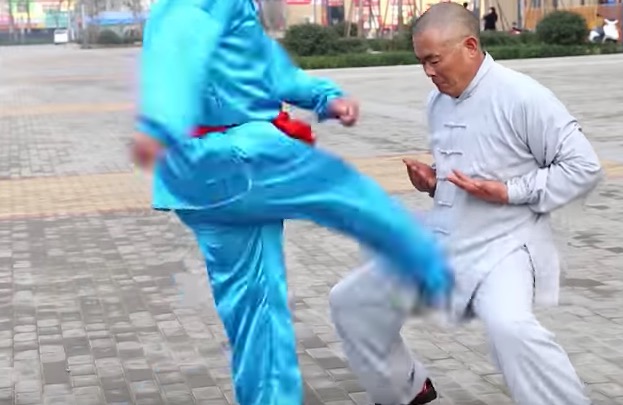 As a man, there is no worse pain than taking a swift blow below the belt. I can’t speak from experience, but I’m sure getting stabbed or shot doesn’t feel too great either, but I think all men can agree that taking a shot to the testicles is a different sort of pain that sits in a league of its own.

There are some men walking the planet, however, that have trained themselves to not feel this pain, or at least trained their mind to ignore it. One well-known man that can take a shot to the crotch without suffering any sort of injury is Chinese kung fu practitioner Wan Liutai.

We’re not talking about accidental shots below the belt like your toddler catching you in the wrong spot or misfielding a ground ball, no, this man can take giant wooden logs that weigh almost 100 pounds straight to the testis. The practitioners call the ancient Chinese breathing technique ‘qigong.’

So, why the hell are these people training like this? One kung fu master featured in the video simply says that it’s the weakest part of the body and they must make it as strong as iron.

It’s not just a breathing technique that’s allowing these men to take these types of shots below the belt.

Sports medicine specialist Michael Kelly out of New Jersey spoke with Mental Floss and explained what the hell it is we’re actually seeing these men do.

“It’s not really some sort of skill you can develop to prevent injury to the testicles,” Kelly says. “If you look closely at the videos, he brings his inner thighs together. He’s distributing the force over a wider surface area by using his abdominal muscles as he moves forward.”

According to Kelly, it’s possible such feats are accomplished by tensing the adductor muscles in the thigh, which connect to the testicles. By squeezing, Kelly says, the martial artist can create a “tensile net” that might better absorb force. But even that would be painful, and very likely cause injury.

There’s another trick these men could be pulling too, which involves activated the cremaster muscle allowing them to retract their testicles into their abdomen.

This all well and fine, but here’s the thing, these men are training to take these blows that they see coming. This isn’t going to help them when they’re playing a game of pickup and your teammate throws an atrocious bounce pass that catches you down below.