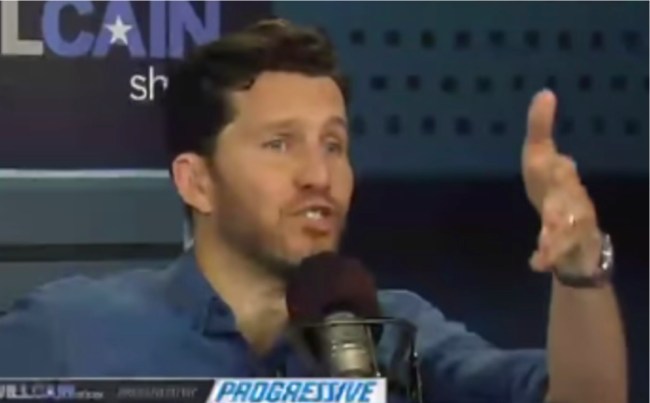 Will Cain’s an ESPN talent known for appearing on shows like First Take, among others, so it was probably a bit of a surprise when he was asked to co-host High Noon today with Pablo S. Torre, with Cain given the assumption he was filling in for regular host Bomani Jones. Keyword: assumption.

Just as the intro for High Noon comes in and Torre and Will Cain do their little schtick, BOOM, out pops Jones, who reveals that it was all one big April Fools’ joke and that Cain was the butt of it. That’s pretty awesome, because to execute this on live TV is ballsy. Things got a little awkward immediately afterwards, though as Cain stormed off after being told that, nope, he wasn’t actually sitting in to do the show. Take a look at the whole thing below, via Torre’s Twitter account.

Massive thanks to @willcain for hosting @HIGHNOONonESPN with me today pic.twitter.com/bAjXSzqOFH

Seriously, props to Jones and Torre for pulling off the only good April Fools’ joke the Internet gave us today. But, damn, how about Will Cain’s reaction? Dude storms off like he just got told he wasn’t cool enough to sit at the cool kids’ lunch table, clearly upset that he got punked on live TV. I mean, I get it, because if he really was told he was hosting, then he probably worked his ass off to get prepped for the show, getting notes down for talking points, so it’s understandable he may be a little salty.

Cain didn’t necessarily to himself any favors afterwards on Twitter, when he seemed to care more about what people were saying, only proving that the April Fools’ joke really pissed him off. Look at some of what he was saying.

Help me out here guys. I’m beginning to think sports media is a little biased and WANTED this to be true. That couldn’t be, right? pic.twitter.com/2TWI0RBfNp

Real text to my agent. Get me an audition, stat. pic.twitter.com/XWF9X5Kh61

Seems a little too invested to say he doesn’t care to me, right? Sometimes you’ve just got to take an L and move on, Cainer.

Look, April Fools’ Day is the one day of the year where we can treat one another like dirt and claim that it’s all in good fun. Seriously, just go through my Facebook memories from this day over the course of the past five years and you’ll see fake puppies looking for a new home at my parents’ house, my older sister fake being pregnant, and my younger sister fake being adopted. Considering all that, here’s to hoping Will Cain laughs all this off tomorrow if and when someone brings it up on ESPN, because it was incredible.