Wisconsin Football Might Be Down To Its Fourth String Quarterback Due To Injury, COVID-19 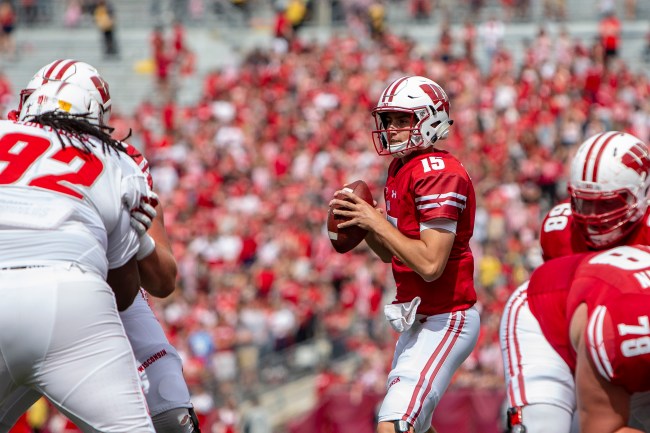 Wisconsin football may be forced to play the next three weeks without their top three quarterbacks, per Milwaukee Journey Sentinel’s Jeff Potrykus.

It was not always certain that the Big 10 would be playing football this year, but when it was, the Badgers began the year on a sour note. Incumbent starting quarterback Jack Coan suffered a non-contact injury to his right foot during practice in early October and was announced out indefinitely less than a month before the team’s season opener against Illinois.

True freshman four-star recruit Graham Mertz started in his place and completed 20-of-21 passes for 248 yards and five touchdowns to begin his time in Madison. Not a bad start to a collegiate career.

He played an incredible game that put the college football world on notice, but things quickly came crashing down on Sunday when reports surfaced that Mertz tested positive for COVID-19. The school was to issue consecutive PCR tests in the following days to confirm whether the test was legitimate or flagged as a false positive and determine whether Mertz would be allowed to return to play or be placed into isolation for 21 days, per the conference’s protocol. Very little word came from the program on Monday and reports began to surface late in the evening that it was not only Mertz who tested positive.

Head coach Paul Chryst said during a Zoom session on Monday that he is confident his team will play as planned on Saturday, but would not comment on the quarterback room. After the call concluded, per Potrykus, sources indicated that the team’s backup (really the third string) quarterback Chase Wolf was not at practice on Monday and also had a test pop.

Should both Mertz and Wolf receive another test, they will be unavailable for the team’s next three games against Nebraska, Purdue and Michigan. The next quarterback on the depth chart is redshirt junior Danny Vanden Boom, who has a great name but very little experience. The 6-foot-5, 207-pound Wisconsin native has seen action in five games and completed one pass for a three-yard touchdown.

Vanden Boom won the state of Wisconsin’s top three-sport athlete in 2016-17 and won a state title in both football (2) and baseball as a pitcher. He did not originally factor into Chryst and the Badgers’ plans for 2020, but this year has been unpredictable since the clock hit midnight on New Year’s Day. It is unlikely that either Mertz and Wolf will test negative and it looks like Vanden Boom will be the starter. In a situation where he is unable to play, it would be on the shoulders of 6-foot-8 true freshman Daniel Wright to lead the charge. Wright is the team’s last listed quarterback.