Thousands Of Fans Were Stranded In The Rain After Wrestlemania And It Looked Like Fyre Festival 2.0 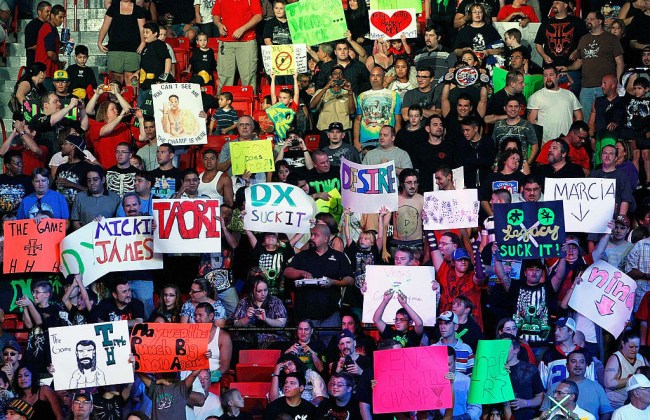 It’s been a while since I stopped watching wrestling on a regular basis but I’ll always have a special place in my heart for the “sport” that’s responsible for getting me in trouble because I told one of my middle school teachers to suck it without actually knowing what it meant at the time.

While I couldn’t have told you much about the storylines leading up to this year’s Wrestlemania, that wasn’t going to stop me from tuning in (and by “tuning in” I mean “frantically hunting for new streams whenever the one I was watching got taken down”).

The final match of the night might have been fantastically botched but there were plenty of other highlights, like watching Kofi Kingston finally get his hands on the WWE Championship belt and seeing Shane McMahon do what Shane McMahon does best.

Over 80,000 people flocked to MetLife Stadium on Sunday for Wrestlemania 35, and if you’ve ever attended an event at the venue, you know it can be a pain in the ass to get to—and even more difficult to leave.

Tons of lucky fans got to learn this the hard way last night when they flocked out of the stadium after the final bell rang, where they were greeted by heavy rain, a serious lack of transportation options, and a firsthand taste of what it might have been like to attend Fyre Festival.

This is what @MetLifeStadium looked like at 1a after the end of @wwe @WrestleMania the lines for the buses leaving the stadium were ridiculous and since @PATHTrain are cross honoring until 5a that tells me @NJTRANSIT did not properly plan for the event properly. #FixMePhilMurphy pic.twitter.com/828BsliOKI

I’m never and I mean NEVER coming back to this city for a wrestling event I had to stand in the POURING rain for almost two hours just to get an Uber, everything is so spread out it’s hard to get anywhere without spending a ridiculous amount of money

Geez @NJTRANSIT @MetLifeStadium @WrestleMania @WWE you had thousands of people waiting in the rain for 3 hours for trains that were ridiculously delayed. Uber also impossible.

We’re your fans, some traveled far to be here. Please do better next time. @Deadspin @cagesideseats pic.twitter.com/H89wRNv8kp

The folks at the Meadowlands and the NJ transit authority had no idea what they were in for when Wrestlemania dumped. Waited over two hours in the rain for a bus (no dice), then a train (no dice), and finally a $100+ Uber. Piss poor planning!

We are on a train now. I feel so bad for the thousands waiting in the rain still. this is BRUTAL #WrestleMania pic.twitter.com/BZdjxETkFx

the wait for the post show train. absurd. wwe needs to think about shortening show. we are just leaving that area now pic.twitter.com/r9vjNq6l2u