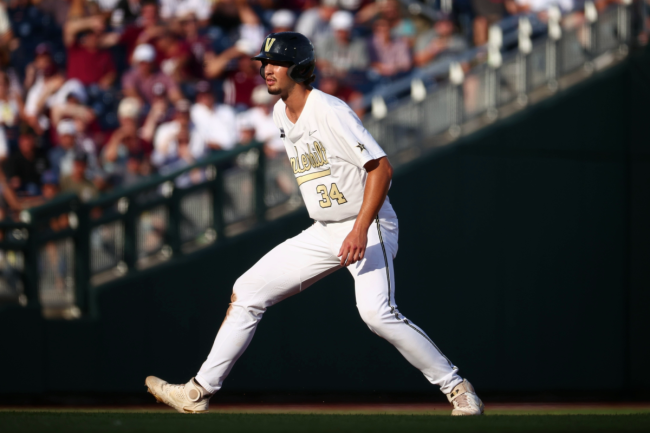 The Yankees have made another splash in the 2022 MLB Draft, taking Aaron Judge 2.0 with their first-round pick. New York selected Vanderbilt outfielder Spencer Jones with the 25th pick in this week’s draft.

The left-handed slugger stands 6-foot-7, eerily similar to another star that’s currently manning center field in the Bronx. Aaron Judge was the organization’s first round pick back in 2013, and it’s safe to say the pick has worked out wonderfully for the Yanks.

Judge leads the MLB in home runs, having smacked 33 long balls at the All-Star break. He’s hitting .284 on the season and is experiencing his best year as a pro. That may force the Yankees to think about upping his pay as he treks through a contract campaign.

The outfielder has helped bolster a lineup that leads the majors in homers and scoring. Now, they’ll get a player with a similar skillset and stature in Jones.

Of course, it could take a little time before Jones gets through the minor league system, but he’s got the ability. The lefty hit .370 last year at Vanderbilt while slugging 12 homers, stealing 14 bases, and leading the team in on-base percentage.

Those stats, plus that mammoth stature, have fans talking.

Fans react to the Yankees first round MLB Draft pick

The MLB world was quick to react to the Yankees latest draft pick, with most being unable to help themselves from comparing him to Aaron Judge.

Take a look at the immediate response.

The #Yankees have selected OF Spencer Jones from Vanderbilt.

A 6-foot-7 outfielder going to the Yanks? Sounds familiar.

Many also think he’s going to love that short porch in right field at Yankee Stadium.

There’s still a ways to go before he gets to the Big Apple, but if he does, it will be daunting to see him line up alongside Aaron Judge.