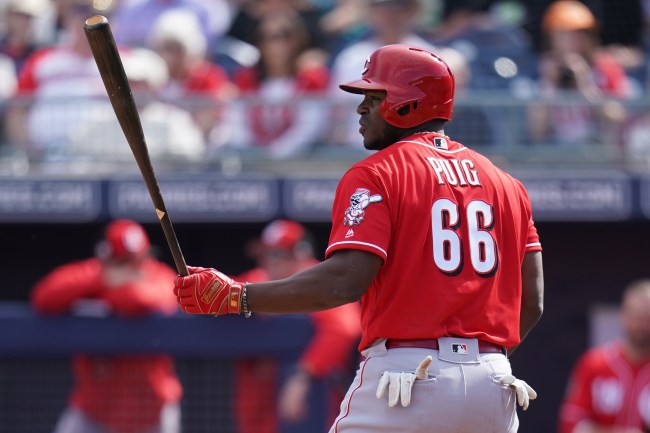 Yasiel Puig came into MLB like a f-cking firestorm back in 2013 as a member of the L.A. Dodgers, electrifying his team and the city with his charisma and balls-to-the-wall style of play. Playing in 104 games that season, he hit 19 homers and drove in 42 runs, which helped him finish second in the NL in Rookie of the Year voting.

Since Puig Mania hit six years ago, though, something’s sort of been off about the love for the mercurial outfielder. Sure, Yasiel Puig still looks like he’s having fun and is running around reckless out there on the field, but he hasn’t ben embraced like he was in his first couple of years — or performed up to the standard many thought he would.

Set to become a free agent after the 2019 season, Yasiel Puig is determined to finally start working hard again — because, you know, the dude wants to get paid.

“I never worked hard,” Puig told Gonzalez. “Maybe that’s the reason why I didn’t have my better years. … The last couple years, I didn’t work hard because I still have a contract to go. Now I think I’ll work hard more than any year in my life.”

This kind of reminds me of that whole Manny Machado thing from last year’s playoffs — who, at the time, was ironically Yasiel Puig’s teammate on the Dodgers. Remember, the now $300 million man said that hustling “isn’t his cup of tea,” which made people irate given his team was competing for a World Series at the time.

Anyway, back to Puig, the outfielder is clearly determined to have his best year in the majors after admittedly going through the motions the past few years. Of course, while he wants to help the Reds win, his sole focus is to rack up stats in order to get that big paycheck like Machado did. Here’s what Yasiel Puig told MLB.com‘s Mark Sheldon:

“I need to have my best season ever and next year have a new contract. I don’t know where I’m going to be. I’m going to do the best I can this year,” Puig said.

Would he be willing to stay longer?

“I don’t know. You can ask the GM if he wants to sign me,” Puig replied. “If he signs, gives me the money, I will be here as many years as he wants. I love Ohio. This is my color. I love red.”

Old school baseball people probably hate this mentality from Yasiel Puig, but who really cares. If NBA players like Anthony Davis can sabotage their teams by publicly requesting trades and making life awkward for everyone in an organization, why shouldn’t a guy like Puig come out and admit he’s looking for as much money as possible in his next contract?

Still, the whole not working hard thing from the past few years is a bad look, but, hey, when a guy has millions in his bank account at such a young age, it can be tough not getting distracted with other things; especially when living in L.A. like Puig was then.