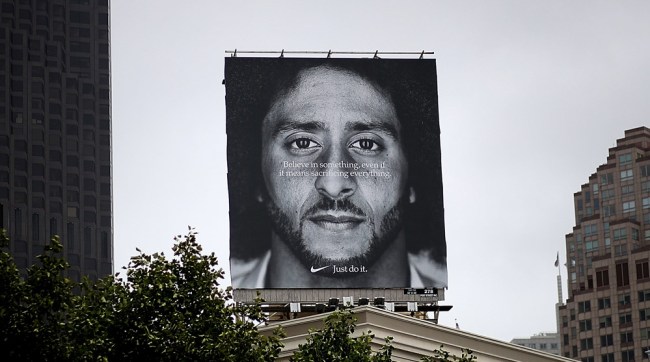 Not only are younger adults currently in the throes of turning Colin Kaepernick’s controversial Nike ad into a meme, they are also reportedly snapping up Nike stock in droves since the advertisement first appeared.

Colin Kaepernick’s controversial ad may have caused Nike’s stock to go down 3% on Tuesday, but that was not the issue with younger investors, aka Nike’s target audience.

While Nike’s stock price initially dropped after Kaepernick’s ad and commercial were released, traders on Robinhood were doing the exact opposite of selling, the brokerage reported to Business Insider.

Nike is currently the 52nd most-popular stock on the brokerage, and has seen its holdings skyrocket thanks to the campaign. Twenty-two thousand investors currently hold the stock on the app, Robinhood’s website shows, up 18% from less than a week ago, according to Business Insider’s tracking of the data.

Robinhood users tend to skew much younger than traditional brokerages, and as Business Insider’s Josh Barro points out, it’s clear that Nike has decided to double down on this under-35 demographic as it seeks to reinvent itself.

Barro also points out that really, this move by Nike has a whole lot to do with, you guessed it, making money.

Younger Americans are also more ethnically diverse than older Americans, so a company trying to sell to young people is naturally selling into a much more diverse “electorate” than a political party running a national election in which the average congressional district is significantly whiter than the country as a whole.

As he points out, anyone that it too upset with Nike or thinks Nike has their back in all things political, it’s not an all or nothing thing for them, or other companies.

“So, if you’re a liberal, you shouldn’t expect Nike to be a reliable partner on every issue — and you shouldn’t be naive about how the political interests of stockholders will often diverge from those of consumers, workers, or the broad public,” he writes.