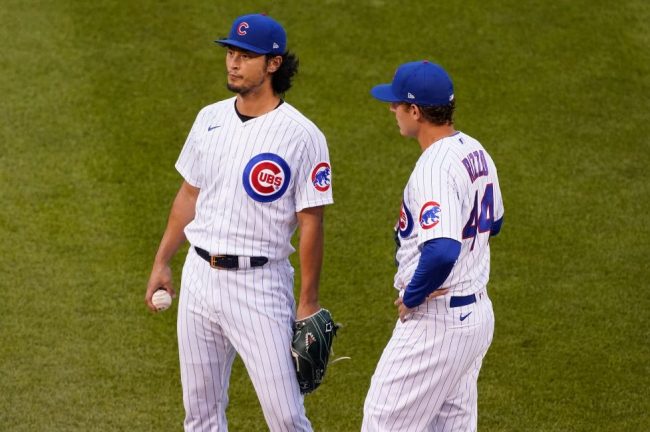 Yu Darvish faced his former team for the first time on Wednesday as the Cubs traveled to San Diego. The Padres’ starter went seven innings with three hits, two earned runs, two walks and eight strikeouts, but that wasn’t the highlight.

Darvish had two at-bats against Chicago and took the chance to pay tribute to his former teammate in hilarious fashion.

Prior to his plate appearance in the third inning, Darvish yelled down to first base at Cubs first baseman Anthony Rizzo. After getting his attention, the song ‘Intoxicated’ by Martin Solveig & GTA played. That is the same walk-up song that Rizzo uses at Wrigley Field.

As Darvish walked to the dish with his friend’s song playing, he donned a big smile as the music played.

Rizzo, down the line, raised his arms in disbelief. He couldn’t help but crack a smile as his walk-up song played in San Diego for someone he used to lineup alongside. It was a hilarious moment and MAJOR best friend goals.

As it would turn out, Darvish wasn’t trolling his former teammate, he was thanking him for being a friend. It was his way to honor him.

“I used that song because it was Rizzo who kind of took care of me when things weren’t really working my way in Chicago,” Darvish said after the game. “It was, in a way, to say ‘thank you’ to him. And obviously I have a good relationship with him.”

He posted a 15-14 record with a 3.60 ERA in Chicago and is grateful for his time in the Windy City. Especially Rizzo.

“We actually texted each other after the game, and I think he was pretty happy about it,” Darvish said.