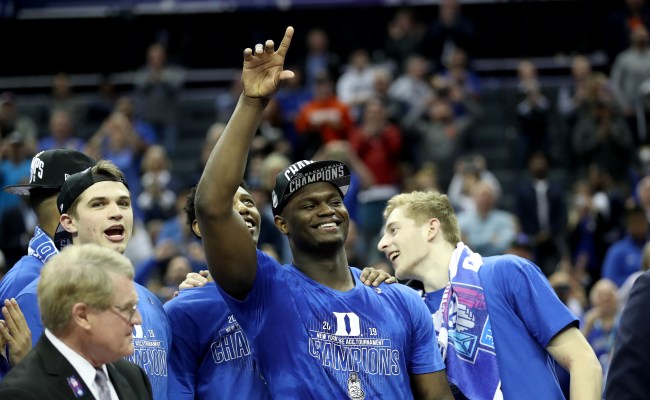 Zion Williamson is the most dominant college basketball player since, probably, Shaquille O’Neal, and deserves every bit of attention he’s getting as he leads his Duke Blue Devils into this year’s NCAA Tournament. The projected No. 1 overall pick in the NBA Draft, Zion seems to be enjoying his time in college, flashing that smile of his anytime he gets the chance, while having a real chance at winning a national title this season.

After an injury scare last month cost him six games because his damn shoe blew up during a game against arch-rival North Carolina, Zion Williamson’s short-term future became a hot topic for everyone. Even before the injury, some people thought the superstar should call it a season, sit out and prepare for the NBA. Others demanded he recover, comeback and honor his scholarship by helping his Duke team. And, while Zion himself claims he never thought about sitting the rest of the season, it’s hard to think the idea didn’t at least cross his mind knowing that some experts think he’s in line to earn as much as $1 billion by the time his hoops career is over.

But here’s something kind of interesting: Zion Williamson really likes the whole college experience. How do I know that? He told Pat Forde of Yahoo! Sports, claiming that, even if the NBA didn’t have its current age minimum rule, he still would have chosen to play at Duke — and his reason’s pretty cool.

“Why would I pass up in this experience to play in the biggest rivalry ever?” Williamson said after Duke beat North Carolina in the ACC tourney semifinals. “You [can’t create] moments like that nowhere else. I mean, just goes without saying. If they still had the high school rule, I’d have still come to college.”

“I’m not that type of person,” he said. “I want to be out there with [his teammates], and I made a commitment to them, and I would be a bad person if I went back on my commitment.”

It’s interesting to hear Zion Williamson say that. After all, even before he took over college hoops, he was still touted as a freak athlete who could jump out of the gym. But he did admit that it took him a little while to get used to the attention.

“I’ll go in [to the gas station] and at least be in there 10 minutes because someone wants to have a conversation,” Williamson said. “I can’t even go to the bathroom sometimes without people bothering me.”

Still, Zion Williamson says that this is the type of life he had hoped and expected for himself. It’s just wild that he’s gone from zero to 50 million in a matter of months.

“I looked myself in the mirror and said, ‘This is the life I wanted to be a part of,'” he said. “My parents told me all this would happen. It’s not much of a shock, but when it happens you’re like, you have to step back and be like, ‘Wow, I guess I’m in it.'”

Whether you’re a Duke fan or not, Zion Williamson is awesome for college hoops. He’s singlehandedly changed lifelong Blue Devil haters into casual supporters. And, with his first (and, presumably, only) NCAA Tournament on the horizon, let’s enjoy whatever he has in store, because he’ll be off to the NBA in a few months.