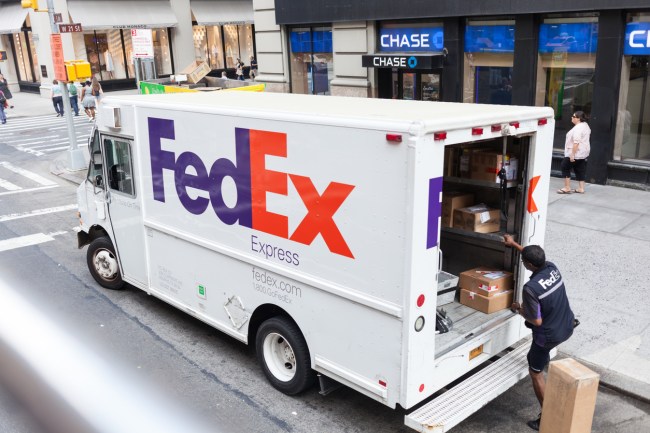 Federal Express is suing the US Commerce Department claiming that the government is putting undue pressure on the company to enforce penalties against Huawei. Well, technically the lawsuit doesn’t actually mention Huawei. But yeah, it’s about Huawei.

Following the US blacklist of Huawei in May, regulations forced the courier to inspect and in some cases divert packages that “pose a national security threat.”

Unsurprisingly, China was having none of this and threatened to go nuclear on FedEx if it continued the practice, banning the company like it was a Tiananmen Square blog post, which could cost DHL’s more successful cousin as much as $1.3B.

Between a rock and a hard place

FedEx is crying foul, claiming that it’s being forced to either break the law and face fines of as much as $250k per occurrence or lose f*ck tons of money by pissing off the Chinese government.

And FedEx has about had it up to here with policing Uncle Sam’s enemies, hence the lawsuit to block Wilbur Ross and the Commerce Department from enforcing its “stupid” export regulations on the company.

What can Brown do for you?

UPS has already indicated this isn’t the hill it wants to die on. The boys in brown have no intention of joining FedEx in the lawsuit, claiming they will continue to “follow government directives.” F*cking squares.

Potatoes and Botox … that’s what Ireland does!

Dublin based drug manufacturer, Allergan is set to be acquired by AbbVie Inc. for $63B in a cash and stock deal. The deal settled at $188 per share, a 45% premium on Allergan’s closing price Tuesday.

The Irish pharma company has been struggling as generic competitors entered came for its throne with vaginal, Alzheimers, and dry-eye products that have eaten away at Allergan’s market share. More patents are set to expire later this year and the stock has dropped to as low as $115 … half of its high of $330 in 2015.

Luckily female discomfort meds and Visine on steroids aren’t the only drugs Allergan is peddling. The company’s rainmaker is Botox which accounts for $8B of Allergan’s $16B in total revenue.

AbbVie has been in the market for a facelift as it prepares for the patent expiration of the world’s number one selling drug, Humira. Generic products have come to market in the EU and are expected to enter the US in 2023.

Adding $16B revenue from Allergan to its own $32B top line will provide much needed cash flow for the new company to accelerate the development of new products.

NO SMOKE, NO SMOKE

San Francisco voted to pass the country’s first ban of e-cigarette sales on Tuesday. The bill still needs the mayor’s John Hancock to become law, but it’s not a good look for e-cig makers.

Under the new bill, stores within SF city limits won’t be able to sell vape products on shelves, and online retailers won’t be able to deliver to customers with San Francisco addresses. Cigarettes and other tobacco products are not affected by the ban.

Hitting (the vape) close to home

This news is bad for all e-cig manufacturers, but especially Juul, which calls San Fran’s Pier 70 home, er, corporate headquarters. Lucky for the #JuulGang, the ban won’t be retroactive.

It’s worth noting that Juul recently blew a metaphorical vape cloud in the city council’s face, buying a 29-floor office tower at 123 Market Street, where it will continue adding employees to keep fighting the good fight.

So you’re telling me there’s a chance

The company recently acquired the number of signatures needed to add an issue to a November ballot, that, if passed, would allow e-cigarette sales to continue in the city to users over 21. Who was collecting those signatures? The Coalition for Reasonable Vaping, financed by none other than Juul itself, of course.