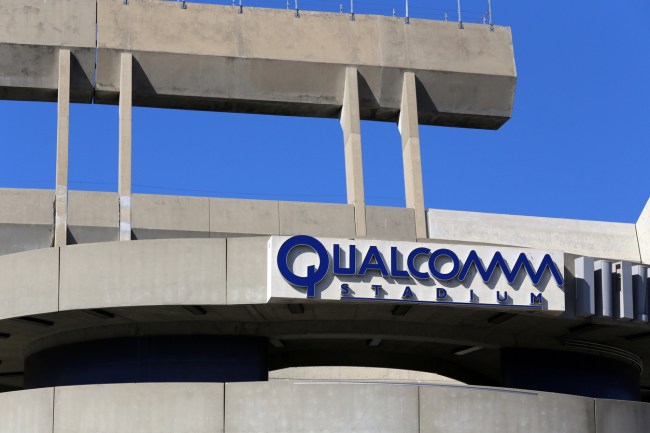 Sure the world’s largest maker of smartphone chips and modems brings in a boatload of cash via hardware sales, but it makes Scrooge McDuck money by licensing its technology patented back when Zack Morris phones were cool. Mr. Wonderful would be so hot and bothered right now.

What proprietary tech does Qualcomm hold a monopoly over?

Oh you know, just the functionality to place calls and connect to the internet. And don’t for a second think the big swinging d*ck of the cell phone space doesn’t know its worth. It currently charges phone markers a percentage of the total value of each phone, in some cases as much as $400.

And herein lies the issue …

Apparently, the FTC has had it up to here with $900 phones. The Commission filed suit against Qualcomm in 2017 and yesterday a judge ruled that “Qualcomm’s licensing practices have strangled competition … for years.”

Here’s what it means for Qualcomm …

Judge Koh ruled that ‘Comm shouldn’t receive a percentage of the total sales price for each phone a cell maker sells, but rather, a smaller percentage based on how much actual QCOM tech exists in the phone. And that’s not all. Koh ordered Qualcomm to renegotiate current agreements and going forward it must also license its patents to rival chipmakers. Translation: Qualcomm just got put in a body bag.

Of course, Qualcomm has cried foul and will certainly appeal. But not before its share price fell almost 11% on the news. This comes just weeks after Qualcomm scored a decisive antitrust victory over Apple. Karma is a b*tch.

Jerome Powell is out here channeling his inner 50 Cent.

The Chairman seems to be content with not making any hikes in 2019. In fact, Jerry Interest Rates said in his presser following the April 30 to May 1 FOMC meeting that the patient approach to changing interest rates would be appropriate “for some time.”

The minutes from that meeting released today indicated that some officials were worried that the recent dip in inflation would cause the Fed to lower interest rates but most agreed with Powell that it was likely temporary. And while the Fed’s 2019 economic outlook is positive, it doesn’t appear positive enough to move the interest rate needle.

But it isn’t all set it and forget it at the Fed. The defenders of open markets will closely monitor the delicate balance between interest rate levels and inflation. The Fed’s current goal is 2% inflation while its target interest rate remains 2.25% to 2.5%.

Markets were largely unmoved by the minutes that could best be described as “meh.”

Tesla’s stock is performing about as well as Bitcoin circa 2018 (… right after Aunt Kathy’s third husband Kip told you to buy).

Tesla shares hit a 2 ½ year low yesterday following reports that Morgan Stanley analyst Adam Jonas, who, at one point had set his price target for the EV maker at $379, indicated on a conference call that the stock could be worth as little as $10.

Jonas, who was, until recently, a Tesla ride or die, voiced concerns over the lack of growth, burn of cash, and potential oversaturation of EVs outside of China.

Analysts from Bank of America and Citi cited their own concerns. In addition to echoing Jonas’ sentiments, Elon Musk’s leaked memo informing his employees that cost-cutting measures are the only way to become a financially stable company has analysts’ collective panties in a bunch.

It appears that Tesla is losing that new car smell along with its ability to trade well beyond the valuation of a typical car maker. Short sellers have made out like bandits this year, as the stock has dropped 42% YTD, with short interest at a 2 year high. David Einhorn is rock hard right now.