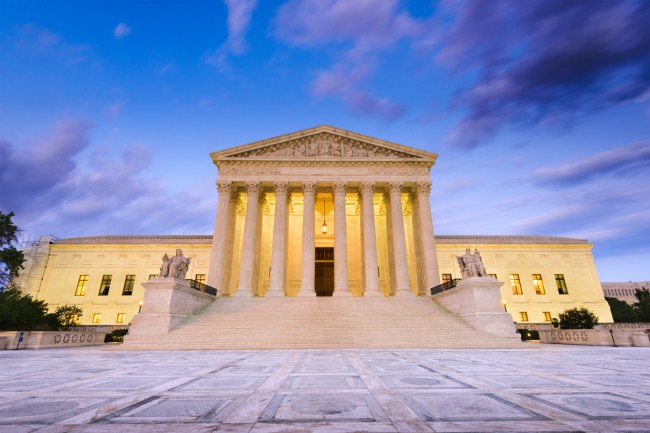 It’s a good day to be waiting with bated breath to hear whether your wildly offensive trademark will gain approval from the US Patent and Trademark Office. Just ask Erik Brunetti, the founder of clothing brand, FUCT, which allegedly stands for “Friends You Can’t Trust.” So like FUBU, but for hipsters.

The US Supreme Court ruled 6-3 on Monday that Johnny Law can’t deny trademark registration just because a request is “immoral or scandalous.” The reason? The First Amendment. Ever heard of it?

Justice Elena Kagan had this to say: “The First Amendment does not allow the government to penalize views just because many people, whether rightly or wrongly, see them as offensive.” RBG and Clarence Thomas among others could be heard saying “yeah, what she said!”

Although this case revolved around an edgy hipster brand, dissenting justices have concerns about how far bigots, and idiots in general, will push the envelope. Justice Sotomayor worries the government will be forced to trademark “the most vulgar, profane, or obscene words and images imaginable.”

Why does this sound familiar?

You might remember that distasteful trademarks have been a point of contention for some time, coming to a head with the 2014 cancellation of The Washington Redskins trademarks. Of course, the issue was put to rest in mid-2017 when the “Slants,” an Asian-American rock band won a Supreme Court case allowing them to trademark their incredibly stupid and offensive name.

BEAUTY AND THE BEAST

In its latest scorched earth campaign, Amazon has taken on an unlikely foe: beauty suppliers. Amazon announced the Amazon Professional Beauty store which will sell goops, creams and styling tools made for professional stylists, barbers etc.

Your sorry ass need not apply …

You’ll need to be a licensed aesthetician (spoiler: this isn’t someone who rides a horse) to gain access to the exclusive club and the perks that come along with it. According to Amazon, membership will include exclusive deals, a vast selection and the convenient shopping experience Amazon Business shoppers have come to expect.

Of course, not everyone was digging Amazon’s new haircut. Shares of Sally Beauty, which we had kind of assumed went the way of Blockbuster, and Ulta, a mall staple got pummeled on the news. Sally fell 14% and Ulta dropped 3% following the announcement.

But Bezos may have met his match. Ulta has found success with beauty lines from Kylie Jenner … and probably at least one of Aunt Becky’s daughters. Shares of Ulta are up 40% in 2019.

President Trump made good on threats to levy additional sanctions against Iran. In addition to current restriction on oil, steel, and Iranian banks, DJT turned his attention to political leaders including Ayatollah Ali Khamenei (who he may or may not have called the wrong name) and foreign minister Javad Zarif.

How do you sanction people?

In retaliation for Iran’s recent transgression, including the alleged attack of oil tankers in the Strait of Hormuz, and the downing of a US drone, President Trump signed an executive order barring Khamenei and Zarif from accessing the international banking system or financial vehicles set up by European and other nations.

That’s all well and good, but Iran’s leaders are about as likely to keep a meaningful portion of their assets in international banks as Mike Pence is to store greenbacks in a high yield savings account at Bank Melli Iran.

So what happens now?

Well, if you’re Iranian, not a whole lot will change. The Iranian economy has been all but crippled by the initial wave of US sanctions which accounts for more than 80% of Iran’s economy. That’s the “good” news.

The bad news? Iran isn’t backing down. The Islamic Republic’s Naval Commander Rear Adm. Hossein Khanzadi said Monday that Iran can and will continue to shoot down drones that drift into Iranian airspace. I’m sure this will end well for everyone involved.