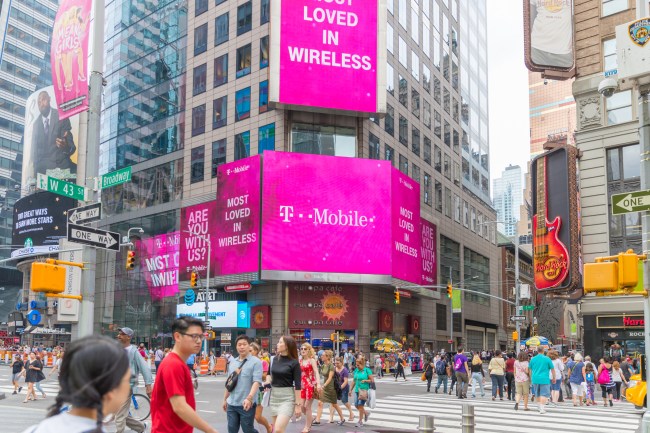 A group of State Attorney General’s led by New York and California (*collective eye roll from non-coastal elites*) filed a lawsuit yesterday to block the merger of T-Mobile and Sprint. The US Department of Justice is currently reviewing the union of the third and fourth largest wireless carriers.

The two had been courting each other for years prior to striking a deal last April. Despite Verizon and AT&T’s larger market share, the AG’s believe that the coupling will prove detrimental to consumers and will lead to price increases, fewer jobs … and fewer opportunities for The Water Coolest to compare Sprint to Cricket Wireless.

This appears to be the first state-level challenge of its kind without federal backing. It’s also unprecedented that the states would file suit while the federal investigation is ongoing. Stay in your lane, state governments.

News of the state-led complaint sent T-Mobile and Sprint shares down 1.58% and 5.87%, respectively.

Despite the states’ cute attempt at unity if the DOJ greenlights the “Sprint Mobile” merger the deal will move forward. The tie-up already has the backing of FCC Chairman Ajit Pai and the post-merger company has agreed to invest in 5G infrastructure (because, Huawei) in rural areas and sell off the Boost Mobile business from Sprint.

The question for the USDOJ is whether or not those concessions are enough. The states don’t seem to think so.

Wells Fargo is entering its third month of a full-time CEO search following the sudden departure of Tim Sloan in late March. C. Allen Parker, WF’s general counsel, manning the fort while the search continues for an external candidate who is prepared to wade into an absolute sh*tstorm.

Several big names from the banking industry were on the firm’s short list, namely Gordon Smith from JPMorgan, William Demchak from PNC, and Richard Davis from USBancorp. While Smith is still being pursued, Demchak and Davis have both turned down the opportunity, because, f*ck that.

I volunteer as tribute!

If only it was that easy. Wells can’t just go offering the job to any Tom, Dick or Harry. The Office of the Comptroller of the Currency (OCC) must approve any person appointed by the bank. In fact, finance chief John Shrewsberry was given strong consideration as a successor, but that was nixed by the Fed and OCC.

In addition to the government, the banks largest shareholder, Berkshire Hathaway, also has a say in the matter. Buffet and Munger both believe the replacement shouldn’t come from Wall Street.