Heads Up? There’s A 10 Percent Chance A Rocket Falling From The Sky Will Hit Someone In Next Decade 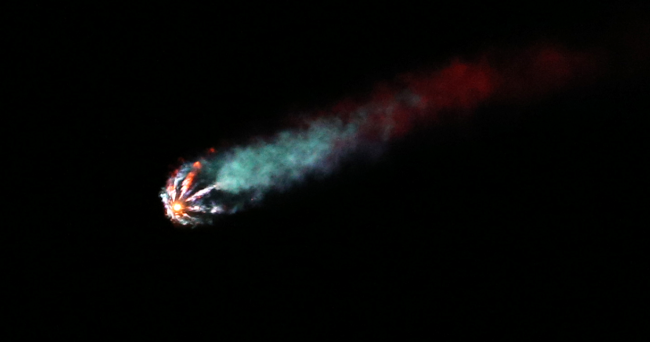 New research states there is a 10 percent chance that sometime over the next decade rocket parts falling from the sky will hit someone on Earth.

In a new paper published in Nature Communications, scientists at the University of British Columbia in Canada predict that due to the increased number of rockets being launched into space every year – a record 135 went up in 2021 with even more to come in 2022 – there is a growing risk of casualties caused by falling rocket debris, especially near the equator.

“We think this has to stop,” said one of the study’s authors, Dr. Michael Byers. “We have modern rockets that can avoid uncontrolled re-entries, rather than playing Russian roulette with the Ivory Coast and India. Who’s to say the next piece won’t come down in central Mumbai?”

In 2020, over 60% of launches to low Earth orbit resulted in a rocket body being abandoned in orbit. Remaining in orbit for days, months or even years, these large objects pose a collision hazard for operational satellites. They can also, in the event of a collision or an explosion of residual fuel, fragment into thousands of smaller but still potentially destructive pieces of space debris, creating even more hazards for satellites. There is yet another risk, which is the focus of this paper: when intact stages return to Earth, a substantial fraction of their mass survives the heat of atmospheric reentry as debris. Many of the surviving pieces are potentially lethal, posing serious risks on land, at sea and to people in aeroplanes.

There are solutions to the threat of falling rocket debris, they just cost money

According to the study, over the past 30 years, more than 1,500 rocket bodies have deorbited with approximately 70% of them deorbiting in an uncontrolled manner.

However, safe, controlled reentries of rockets from orbit are certainly possible. There is just one thing standing in the way: cost.

Reignitable engines and the extra fuel required for a controlled reentry is quite often ignored in the interest of saving money.

“We argue that recent improvements in technology and mission design make most of these uncontrolled reentries unnecessary, but that launching states and companies are reluctant to take on the increased costs involved,” the study’s authors wrote. “Those national governments whose populations are being put at risk should demand that major spacefaring states act, together, to mandate controlled rocket reentries, create meaningful consequences for non-compliance and thus eliminate the risks for everyone.”

A satellite crashed in Guizhou, China.

But There is no information about which satellite crashed and when.

Some people said that it was a series of Long March 3 carrier rockets. pic.twitter.com/zwJM9gQmf2

This warning shouldn’t come as much of a shock to those who should know because according to the European Space Agency (ESA), there are over 750,000 pieces of space debris currently orbiting Earth.

We humans have left so much junk floating around in space over the past nine decades or so that trying to keep it from slamming into and damaging things like the International Space Station has become a full-time job.

In December of 2020, NASA, the organization that makes predictions for asteroids that may or may not hit our planet almost 50 years from now, was tracking an object headed towards Earth and they were not 100 percent certain what it was.

Space has become so congested with all the debris and other junk we’ve left up there, if something isn’t done about it we could eventually become trapped on Earth, completely cut off from other planets. Plus, all that debris floating around the planet will also impact our ability to study space, not to mention the potential for disruption of important technology like television, GPS, weather-tracking services, and cell phone services.