Aaron Carter Is Ready To ‘Tell His Truth’ About Experiences With Michael Jackson – Will He Flip On The King Of Pop? 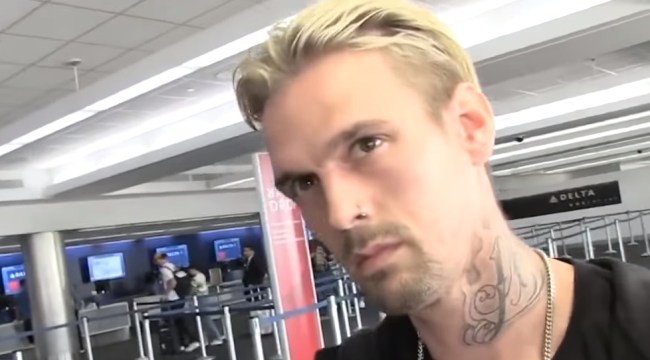 Aaron Carter aggressively defended Michael Jackson against the accusations of abuse that was presented by Wade Robson and James Safechuck in the HBO documentary Leaving Neverland. Carter even threatened to punch one of Jackson’s alleged victims in the face for making claims that the King of Pop molested them. Now, Carter may be flipping on Jackson because he is nearly ready to “tell his truth” about Michael Jackson.

Aaron Carter has been defending Michael Jackson about allegations of sexual abuse for years. Even when Carter was a teen, the singer vigorously defended Jackson on The Howard Stern Show in 2005. However, Carter may be having second thoughts.

Carter was interviewed by TMZ this week and discussed Michael Jackson. “I will tell my truth,” Carter said. “[My family’s] known about it, they just never talk about it… I keep it real as f*ck, I don’t care.” Could Aaron Carter be flipping on Michael Jackson?

Carter also talked about threatening to fight Jackson’s victims who spoke out about the alleged abuse. “To be honest, after seeing everyone’s story unfold, I mean, I was a little aggressive when I talked about it at first,” Carter said.

“Okay, you’re a grown man, and when Michael Jackson was alive, you are backing him,” Carter said last month in a shot against Wade Robson. “You are up his a**. You are kissing his a**. You are there to testify for him under oath. And then when he dies, you decide that’s a good time to come out? No. What you’re doing is you’re actually stomping on an icon and a legend’s grave.”

Carter is writing a book about his life and noted that it would be “appropriate” to tell the stories about his time with Michael Jackson. Could this all be a money-grab? Carter also said, “I’ll always have his back though.” But money for a book deal is a powerful thing that will make people say whatever is needed to sell copies.