Actress In The ‘WandaVision’ Commercials Talks Auditioning For The Part, MCU Secrecy 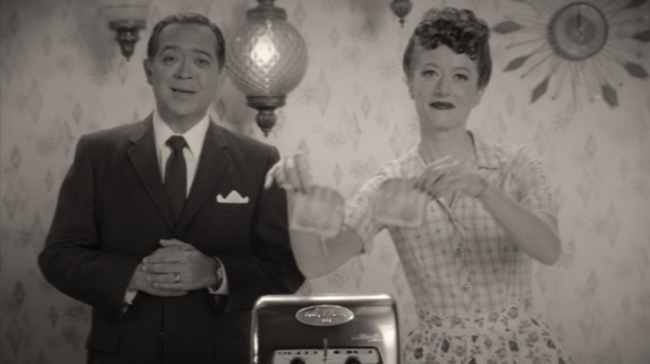 Much like pretty much every other actor who ends up appearing in a Marvel movie or TV show (see: Dennings, Kat), the actress who showed up periodically in the commercials on WandaVision, Victoria Blade had no idea what part she was actually auditioning for, let alone what Marvel project it was.

“I got an audition through my agent for an untitled Marvel streaming project; there was no title, there was no script, there was no information other than, ‘This is gonna be a show!’ and I had read for a different townsperson character that appears in the first couple of episodes; I didn’t read for the commercial woman in my initial audition,” Blade told The Direct. “That was a self-tape audition, so literally, like, me and my husband in the living room taping the scenes that they sent, and then [I] sent that tape in, and didn’t hear anything [for I think] a couple of weeks.

“And then after a couple of weeks I was asked to come in the next day to the table reads with the cast. So it was a little mysterious; I was asked to come in for a day’s work – it wasn’t an audition – and basically help them read through all of the scripts within a week of each other. So I was reading a lot of the smaller roles that hadn’t been cast yet to basically help facilitate. But also, when I arrived, I met the whole cast; I met [Elizabeth Olsen] and Paul [Bettany] and the director [Matt Shakman], and I didn’t even know who I was gonna be meeting that day.”

“No one told me anything, so it was a really fun surprise, and someone came up to me from the production staff and was like ‘Oh, we just loved your audition tape; you’re so playful and fun,’ and that was such nice feedback to get because, you know, as an actor you send out these tapes all the time, and I barely even remembered which tape he was talking about. So that was really nice feedback to get.

“But we were like, on the WandaVision set; day one we were touring the set because it was the first day of rehearsals, basically. So that was an incredibly lovely experience because I basically got to sit in on all of the pre-production meetings with the cast as we were exploring the story and the world, and got to hear directly from the writers what the vision was – the WandaVision! *laughs* So it was a blast and then a week or two later I was offered the role of the commercial woman in all of the live action commercials in the show.”

Oh, Marvel… you so cray-cray.

As for what those commercials during WandaVision (the actor in them was played by Ithamar Enriquez, by the way) were actually supposed to mean, WandaVision director Matt Shakman told TVLine, “Wanda gave roles to almost everyone in Westview. Those two actors, or townspeople, that we picked to be in the commercials were meant to be the same as everything else — that they were iterating through time, in the same way that Wanda’s car is a red Buick that iterates through time. Wanda has cast these two to be her commercial actors, and they appear in every single episode, and they are part of the broadcast.

“It was also meant to be a repository for Wanda’s unconscious. She’s putting something into these commercials that are clues to some of the bigger thematics in the show.”

WandaVision creator and showrunner Jac Schaeffer echoed that explanation, saying, “There’s so much speculation about what they mean and we went around and around about what we wanted them to be. And ultimately, they are about [Wanda’s] subconscious, which a lot of fans have guessed.”

So, no the commercials didn’t represent the Infinity Stones and the actors weren’t Wanda’s parents. Bummer, for sure, but at least now we know.