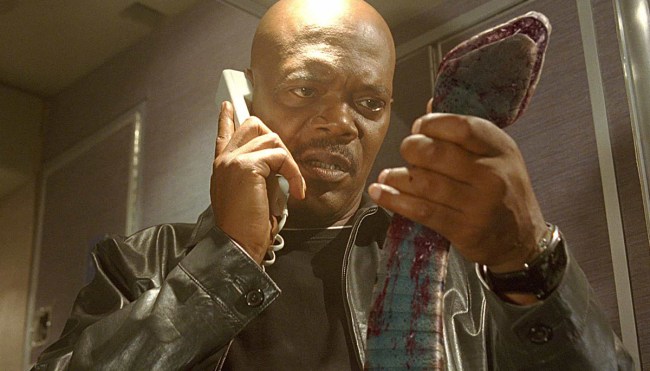 It’s hard to believe it’s been over 15 years since the internet became absolutely enamored with Snakes on a Plane, the amazingly dumb Samuel L. Jackson vehicle that was released in 2006 after an online movement resulted in the actor doing reshoots so the movie could include one of the most iconic lines of his cinematic career.

Despite the amount of publicity Snakes on a Plane was able to drum up prior to hitting theaters, it ultimately crashed and burned at the box office; it turns out people were more interested in making jokes about a movie about a crime boss unleashing hundreds of deadly reptiles on a flight to kill a witness than actually paying money to see it.

While that scenario may never unfold on an actual plane, it turns out the idea of a slightly less drastic scenario playing out in real life isn’t as far-fetched as you’d think; in 2016, an Aeromexico flight was forced to make an emergency landing after a slithering stowaway tumbled from the overhead.

According to MalayMail, a similar incident unfolded on an AirAsia flight that departed from Kuala Lumpur on Thursday before making an unscheduled stop after passengers spotted an unwelcome guest in the cabin.

A representative for the airline described it as a “very rare incident” (while adding it can also “occur on any aircraft from time to time,” which is very reassuring). It didn’t take long for the story and the accompanying videos to make the rounds online, and as you’d expect, people had plenty of jokes inspired by a certain film.

The prophecy of Snakes on a Plane has come true. https://t.co/NdezW5beiw

Naurrrr this is my worst fear as a child after watching snakes on a plane a few days before an impromptu flight 😭😭😭 pic.twitter.com/BbmuWbqrGg

It worries me that we speak about Snakes extensively on #MidnightMalaysia and the next day… there’s a snake on a plane. https://t.co/hFR4RFUtOq pic.twitter.com/5P3sAhnhKK