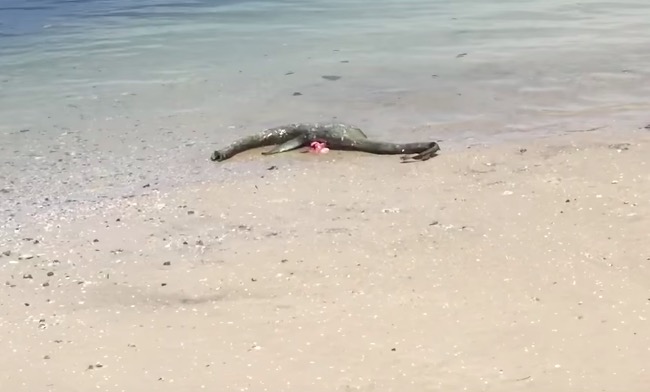 Every in the nation seems to have a hidden monster. There’s the Yeti, Chupacabra, and the legendary Florida Man. The state of Georgia has its own folklore legendary beast that’s known colloquially as the Altamaha-ha Monster. That legend just grew stronger after a hideous sea monster washed up on the Georgia shore and experts can’t come up with an explanation for what it is.

Possible explanations of what this sea monster might be range from a baby Altamaha-ha Monster to a deep sea Frilled Shark to an outright hoax created to drum up viral news. Footage was taken of this hideous beast on the beach and this is the clip that’s confounded everyone when it comes to figuring out what this might be:

Sarah Gibbens at National Geographic spoke with experts to see what they think this bizarre creature might actually be. Here’s what she found out:

— “It looks like a deep-sea shark, like a frilled shark. Although I don’t see gill slits,” Chantal Audra from the Tybee Island Marine Science Center told the Savannah Morning News

— “That could easily be faked. We think someone’s playing a joke on us,” says marine biologist Quinton White from Jacksonville University. White says he and his colleagues deliberated on what the remains might be. “We’ve never seen anything like it. There aren’t really signs of decomposition, and it looks remarkably intact.”

— “I am convinced the ‘sea creature’ is a constructed model of a baby Altamaha-ha Monster,” says John “Crawfish” Crawford, a naturalist at the University of Georgia Marine Extension and Georgia Sea Grant. Crawford notes that the remains were found, “near the ground zero ‘habitat’ of that mythical creature.” (via)

The creature was found on a beach at the Wolf Island National Wildlife Refuge in southeast Georgia. This isn’t too far from the Kings Bay Naval Submarine Base which last I heard was home to some nuclear submarines. Who knows what else they’ve got hidden in there. Is the government hiding the infamous Altamaha-ha Monster on their submarine base? Was this a hoax from some Savannah College of Art and Design (SCAD) students who had access to makeup and prosthetics? We might never know.