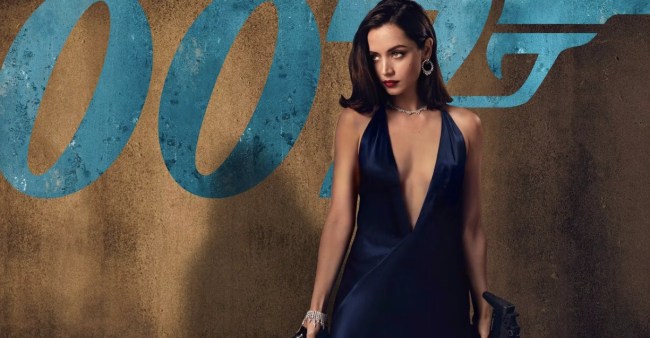 Having appeared as the scene-stealing Paloma in No Time To Die, Daniel Craig’s final outing as the legendary spy James Bond, upcoming A-list actress Ana de Armas has weighed in on whether or not there’s a “need” for a female to play the character and her answer was a resounding no.

“There’s no need for a female Bond. There shouldn’t be any need to steal someone else’s character, you know, to take over. This is a novel, and it leads into this James Bond world and this fantasy of that universe where he’s at.”

“What I would like is that the female roles in the Bond films, even though Bond will continue to be a man, are brought to life in a different way. That they’re given a more substantial part and recognition. That’s what I think is more interesting than flipping things.” [via The Sun]

Having starred in No Time To Die in 2021, de Armas will next be seen starring alongside Ryan Gosling and Chris Evans in The Gray Man, which hits Netflix this Friday, July 22. Then, in September, Ana de Armas will star as Marilyn Monroe in Andrew Dominik’s Blonde, which is expected to be an awards season contender.

de Armas’ calendar isn’t getting lighter anytime soon, as she recently wrapped production on the AppleTV+ film Ghosted alongside Chris Evans. According to screenwriters Rhett Reese and Paul Wernick, who was speaking to our Post-Credit Podcast, the film has an action sequence “the likes of which no one has ever seen before.”