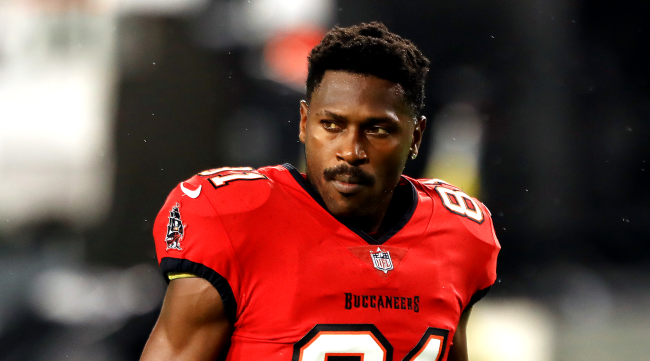 The legal hits just keep on coming for newly re-signed Tampa Bay Buccaneers wide receiver Antonio Brown as now he is being sued over a January 2020 incident with a moving truck driver.

Just last month, the 32-year-old Brown was able to settle one of the many lawsuits that have been filed against over the past few years. That settlement was with the woman, Britney Taylor, who had accused him of rape in 2018.

Now he faces a new lawsuit that was filed Wednesday in Broward County by the driver of a moving truck, Anton Tumanov.

Tumanov claims Brown and his trainer threw rocks at his moving company truck and then attacked him after refusing to pay the $4,000 moving bill.

Mugshot of Glenn Holt, Antonio Brown’s trainer who was arrested for allegedly beating up moving a company driver at Brown’s Hollywood, FL home. Police still want to speak with Brown after the pair allegedly pulled the driver from the truck. @7News pic.twitter.com/UzG3Lwspp9

In June of 2020, Brown pleaded no contest to a felony burglary charge and misdemeanor charges of battery and criminal mischief and received two years of probation.

In court documents obtained by Matt Baker of the Tampa Bay Times, this new civil lawsuit against Brown claims that when Tumanov arrived at the residence, he was “met with resistance and violence.”

Tumanov claims that as a result of the attack he “continues to suffer severe bodily injuries, pecuniary losses, and mental anguish.”