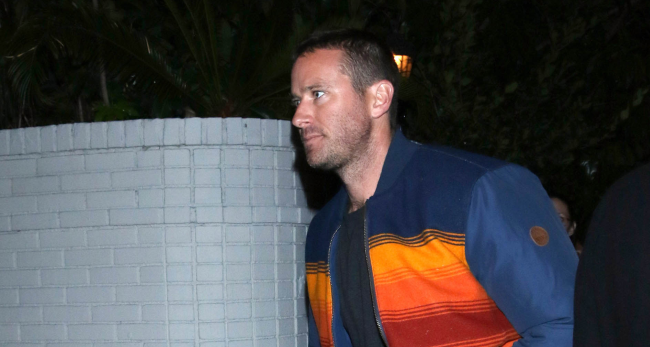 So far, all of the sordid stories surrounding actor Armie Hammer have led to his losing his agent and publicist as well as some acting jobs, but none of them have led to any actual criminal chrges.

Hammer has been accused by various women of everything from rape to cannibalism following the leak of some graphic direct messages allegedly written by the 34-year-old actor.

Hammer’s ex-girlfriend Courtney Vucekovich then accused him of having cannibalistic tendencies, while another, Paige Lorenze claimed he carved the letter “A” into her skin near her pubic region.

Another woman who says she was on and off with Hammer from 2016 to 2020 has accused him of rape, leading the Los Angeles Police Department to begin an investigation.

Armie’s estranged wife Elizabeth Chambers, upon hearing about the many allegations against the actor, compared him to serial killer Ted Bundy.

Now he will have even more to deal with as Casey Hammer, the granddaughter of Armand Hammer and Armie’s aunt, will be turning her self-published 2015 book Surviving My Birthright into a limited documentary series.

2021 is going to kneel down before me and kiss my feet because this year I’m the boss of my own year. 2020 was a cheap shot no one was expecting. Now I know what we are up against and it’s time to go to war. Know thy enemy, know thyself…. and exploit the differences.

She has signed an exclusive deal with Talos Films, the production company behind Discovery+’s Queen of Meth and Disney+’s Family Reboot, to develop a docuseries about the Hammer family.

The series will tell the definitive, inside story of the rise and fall of the notorious Hammer family, including its latest unfolding chapter. Talos is currently shopping the project to broadcasters and streamers.

It comes after Vanity Fair published an in-depth expose of the Hammer family and Armie Hammer had to step away from a number of projects including Paramount+ The Godfather series The Offer, Starz’ Watergate drama Gaslit and Lionsgate’s Jennifer Lopez feature Shotgun Wedding as a result of his own recent revelations.

In the docuseries, Casey Hammer will for the first time go into detail about the many controversies surrounding the Hammer family, including claims that Armie’s great-great-grandfather Dr. Julius Hammer sexually abused her when she was a child before being convicted of first-degree manslaughter after the wife of a Russian diplomat he gave an abortion to died.

THe son of Dr. Julius Hammer, Armie’s great-grandfather Armand Hammer, was a business magnate with strong ties to Russia best known for being the president, chief executive officer and owner of Occidental Petroleum.

Author Edward Jay Epstein claims in his book Dossier: The Secret History of Armand Hammer that that it was actually Armand Hammer, then a medical student, not Julius who performed the abortion and the doctor only took the blame to protect his son.

Casey, who is estranged from most of her family, will be joined in the series by other survivors in telling their secrets about the Hammer family.

“The Hammer family history is like Succession on steroids. A dysfunctional dynasty with its male characters exhibiting all the devastating consequences of privilege gone wild,” said Talos Films co-founders Elli Hakami and Julian P. Hobbs. “Now, for the first time, Casey Hammer will tell not just her story, but the definitive family history, leaving no stone unturned. With new unfolding revelations and present-day consequences, this mini-series will provide audiences with a riveting journey into a family where reputation is everything and where things are never how they appear.”