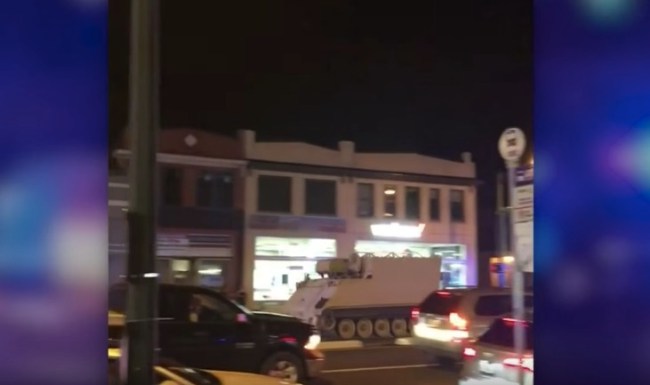 I’m a complete sucker for a good car chase. I get that they’re dangerous situations which put the public at risk, and showing them on TV or streaming them online just glorifies criminality in certain ways, but I just cannot stop myself from tuning in whenever someone hits the highway in a high-speed pursuit.

I’ve covered car chases extensively here at BroBible for years but until last night I’ve never seen anything like what transpired in Virginia. Someone stole an armored military vehicle and took it on a joy ride across Virginia for two hours with police in tow. Bystanders in Richmond captured some wild footage of police pursuing what the public thought was a tank but is actually an M577 armored command and control vehicle:

Police are chasing a stolen tank in Virginia. pic.twitter.com/5Kbvui3Uuf

This is INSANE! Someone has hijacked a “Tank-like” vehicle from Fort Pickett and just drove it by our apartment! This is on Broad Street in the Fan. pic.twitter.com/EYfhFux1dk

I don't know which is a crazier sight, this thing humming down the road or the police cars trying to chase it https://t.co/Entb9XAIN1

A bunch of police chasing a military tank is just an impromptu parade if you think about it https://t.co/b2kEUXO1Jb

The armored vehicle was stolen from the Fort Pickett National Guard base in Nottoway County around 7:50pm and police were taken on a 60-mile chase. The soldier who stole the vehicle was taken into custody after the pursuit.

The vehicle wasn’t equipped with any weapons, and it tops out at 45 MPH so it was kind of *safer* than your typical police car chase because it couldn’t pick up speed. According to NBC Washington, charges are pending but police have not released any information about the soldier’s identity.