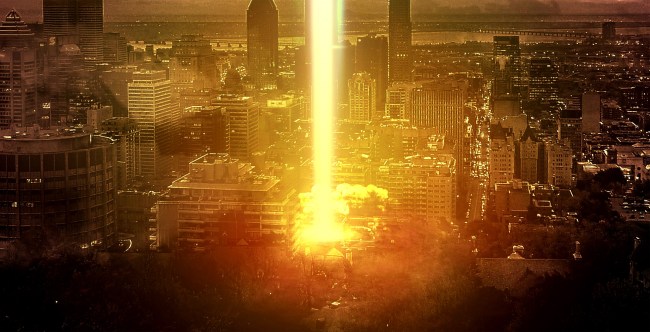 The United States Army has revealed that it is developing and attempting to build the most powerful laser weapon in the history of the world and when it’s finally complete, it will be capable of vaporizing targets with short, pulse-like bursts.

A notice for the prospective weapon, called the Tactical Ultrashort Pulsed Laser for Army Platforms (UPSL), was posted on the Pentagon’s Small Business Investment Research website.

The weapon will fire 1 trillion watts of energy in 1 quadrillionth of a second, reports Popular Mechanics. If contructed as planned, it would be a million times stronger than current lasers.

The UPSL will reportedly be used to bring down drones by vaporizing its outer shell and frying its electronics, fuel and explosive payloads. The laser will also disrupt electronics systems in the vicinity of the strike, making it a functional electromagnetic pulse (EMP).

Related: Watch Navy Ship USS Portland Obliterate A Drone Out Of The Sky With A Giant Frickin’ Laser Beam

Most current military laser weapons are continuous wave lasers which use a continuous beam of energy to melt or burn a target. The USPL will take a different approach, according to the notice.

While most CW lasers simply melt targets, USPL systems are able to neutralize threats via three distinct mechanisms: ablation of material from the target, the blinding of sensors through broadband supercontinuum generation in the air, and the generation of a localized electronic interference used to overload a threat’s internal electronics.

Even the propagation of light from a USPL system holds unique advantages. The sheer amount of intensity in a terawatt pulse laser is able to cause a non-linear effect in air resulting in a self-focusing filament. These filaments propagate without diffraction, providing a potential solution to the negative impact turbulence has on beam quality when propagating a conventional CW laser system.

Differences in lethality as well as propagation mechanisms makes USPL technology one of particular interest for numerous mission sets.

The U.S. Army is hoping to be able to trial a working prototype of the USPL by August 2022.