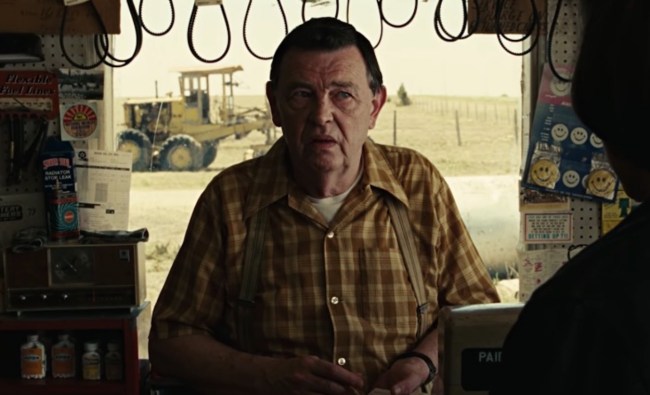 The Coen Brothers’ No Country For Old Men cleaned up at the 2008 Academy Awards. Directors Joel and Ethan Coen won ‘Best Motion Picture’, ‘Best Achievement in Directing’, and ‘Best Writing, Adapted Screenplay’. And actor Javier Bardem won the Best Supporting Actor award. To that I say, only four???

If they’d just cast Arnold Schwarzenegger in Javier Bardem’s role they would’ve cleaned up and likely swept every single award they could’ve possibly been nominated for.

This deepfake of ‘The Coin Toss’ scene at the gas station in No Country For Old Men definitively proves that Arnold Schwarzenegger was the man for the job. He’s able to add an element of humor while maintaining the tension so thick you could cut it with a knife.

The action of flipping the coin is meant to illustrate that killing means virtually nothing to Javier Bardem/Arnold Schwarzenegger’s character. Taking someone’s life is so meaningless that he leaves it up to chance, the flip of a coin. The murderer is so far removed from reality that the only way to make the actual needless slaughtering of another person interesting is to let them call the coin flip.

YouTube channel Ctrl Shift Face spliced Arnold Schwarzenegger into ‘The Coin Toss’ scene and I wanted to call this ‘the only YouTube video you should watch today’ in the headline but I figured I’d let you bros make that choice for yourself.

If that’s not cinematic perfection then I don’t know what is.

The rise of Deepfake technology freaks me out as much as anyone. Being able to splice any person into footage and make it looks real is deeply unsettling. But this is an Oscar-worthy performance from Arnold so if we’re taking it on a case-by-case scenario, I welcome it here.

Also, this deepfake of ‘Nick Offerman Playing Every Full House Character‘ is pretty brilliant in execution as well.