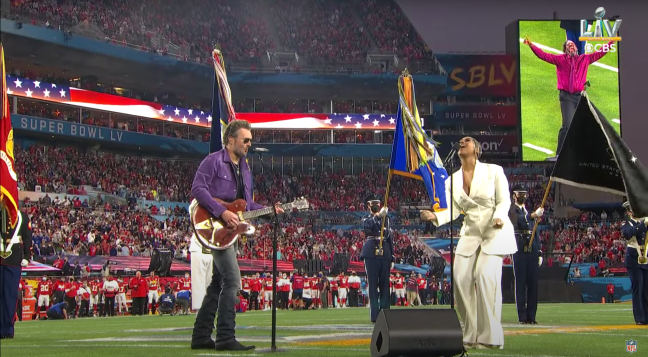 We have been spoiled in recent years with Super Bowls that went down to the wire and could go in favor of either team late into the game. That wasn’t the case on Sunday, as the Tampa Bay Buccaneers dominated the Kansas City Chiefs. As a result, the highlight of the evening came before the game with the national anthem. I’m not talking about Eric Church and Jazmine Sullivan, however. I’m talking about American Sign Language performer Warren “Wawa” Snipe.

As the bombs bursted in air and the flag was still there, much of the world found themselves glued to a timer, impatiently waiting for the exact time from first note to final breath. While the bettors were focused on the Over/Under, I was infatuated with the man performing the song in American Sign Language.

The ASL interpreter was the best part of the National Anthem #SBLV pic.twitter.com/9kZazVVcnK

Shortly after I posted the tweet, we received numerous responses letting us know who the man is and that he is a performer, not an interpreter. I was unaware of his story, and I want to take the time to properly acknowledge his greatness.

Put some respect on Warren “Wawa” Snipe. The 50-year-old, who is deaf, is a creative artist, writer, rapper, actor and performer. Not an interpreter. He has been working within the deaf community since he was very young and has been an inspiration amongst the community for his ability to push the boundaries for what they can do.

Snipe’s performance of the anthem was powerful and enthusiastic, accompanied by a massive smile for a man who was truly honored to have been selected. He explained that it is important for ASL performances to match the tenor, rhythm and tempo of how the singers perform their songs, making practice extremely important.

Leading up to the Super Bowl, Snipe spent hours practicing his renditions of the two pregame songs. He also joined H.E.R. for God Bless America.

His rehearsals took importance in closely tracking how Church and Sullivan typically perform their songs live, and how they delivered the anthem in the past. Snipe’s approach followed how the two handle the songs in their own way. He nailed it.

Snipe, who has a recurring role in the CW Network show ‘Black Lightning,’ is a many of many talents and doesn’t let his hearing impediment hold him back. He calls his musical genre “dip hop,” and tries to present hip hop through deaf eyes.