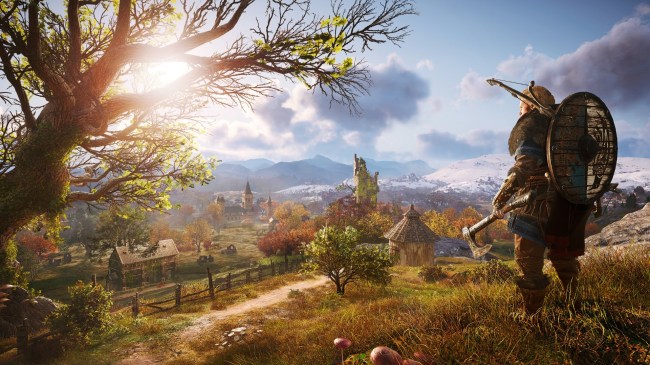 The Assassin’s Creed games have long allowed fans to travel back in time, inviting them to rewrite history from behind a length of bloody steel. From Renaissance Rome to American Revolution-era Boston and beyond, the series has seen players’ virtual passports stamped in some of the medium’s coolest worlds. Toss in history-shaping events, legendary, real-life characters, and dynamic, detailed open-worlds, and the series has provided the best vacations ever…just with way more decapitations.

The upcoming Assassin’s Creed Valhalla is shaping up to be the franchise’s best installment yet, though, at least for anyone who’s ever dreamed of downing a stein of mead while beheading a troll with a battle ax. Promising viking theme aside, the upcoming entry looks to retain and refine its predecessors’ absolute best qualities, while also taking the series in some exciting new directions.

Here’s five reasons we’re excited to check out Valhalla when it hits, like a flail to the face, later this year.

When you think of history’s most bad-ass heroes – or antiheroes – pirates and vikings probably come to mind. Assassin’s Creed IV: Black Flag already let players pillage and plunder as the former, so it’s time to braid those beards and bust some skulls as the latter. As Valhalla‘s Eivor, who can be played as a male or female warrior, fans will be able to customize their hair, clothing, gear, tattoos, and war paint. The new lead also brings the ability to dual-wield weapons. If all that doesn’t get you raising a mug to Odin, maybe leading a loyal clan of Norsemen and piloting longships will do the trick.

Despite the series’ blockbuster success, it began slumping a bit with its 2014 (Assassin’s Creed Unity) and 2015 (Assassin’s Creed Syndicate) entries. It bounced back with a vengeance, however, with 2017’s Assassin’s Creed Origins. Considered one of the franchise’s best offerings, it introduced a number of fresh features, including a heavier focus on role-playing game elements. Origins was crafted by the same studio, Ubisoft Montreal, that made fan-favorite entry Black Flag. Now this same talented team is at the helm of Valhalla. ‘Nuff said.

The blade is back

There was a time when Assassin’s Creed was synonymous with the hidden blade, a wrist-mounted weapon used to perform silent –  and oh-so-satisfying – insta-kills. Leaning more toward all-out action, recent entries have largely holstered this stealth-focused death-dealer. Thankfully, its making a big, bloody return, as Valhalla ‘s protagonist will acquire the legendary dagger early in the story. The game’s new dual-wield weapon system has stolen the spotlight, but stealth-favoring fans will likely be more excited over the opportunity to silently slit throats from behind the iconic, concealed blade. 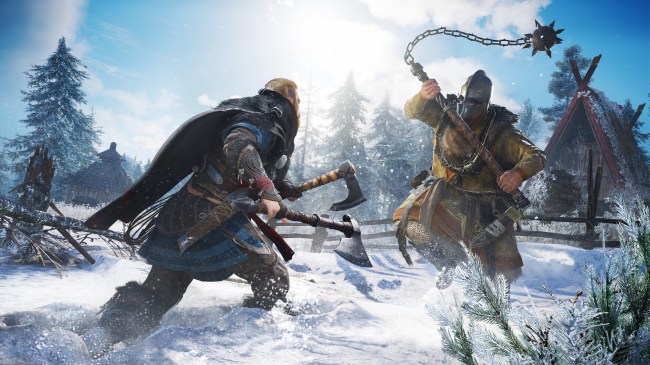 One of the series’ biggest draws is its ability to immerse players in sprawling open-worlds, packed with a level of detail and historical accuracy that could put a National Geographic documentary to shame. Based on Valhalla‘s reveal trailer, its take on Viking age Norway and England aims to up the ante. From the Northern Lights illuminating the skies to longships navigating snow-covered mountains, the video plays like a travel ad for Norway. This beyond-beautiful peek at the Viking homeland is contrasted by their Dark Ages England destination, where battering rams and ballistas tear through a flame-engulfed fortress. It’s a glimpse of Stonehenge, though, that’s already got us anticipating the chance to stain the prehistoric monument with the blood of our enemies.

Valhalla is refining a number of favorite features from previous games, from naval warfare and the protagonist’s winged companion – this time, a Raven – to the ability to carve through baddies in a variety of brutal ways. While we can’t wait to be reacquainted with these gameplay comforts, it’s the promise of new, innovative elements that’s got us smiling beneath are assassin cloaks. Valhalla will introduce resource-gathering raids, as well as the ability to lead a clan and grow a settlement. The dynamic nature of these additions also promises to affect the game’s story on a larger scale, reacting to your growing power, influence, and innards-spilling arsenal.