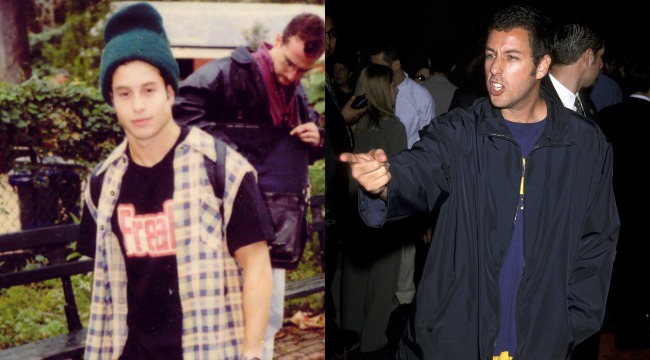 Acceptable Reasons Not To Go Drinking With Adam Sandler:

David Seth Cohen was armed with none of those excuses when he turned down Sandler’s offer to drink with him at his NYC  apartment while filming Big Daddy in November 1998.

At the time, David was a 22-year-old production assistant on the film and turned down a bro hang with one of the biggest comedy stars on the planet because HE HAD WORK TO DO.

“The IHOP thing is nothing,” David told the New York Post. “She thinks she has pain? This girl didn’t let him sit at a table. Imagine passing up a drink with your hero. I’ve been kicking myself since 1998. I never forgave myself.”

Cohen even claims Sandler “started messing” with him by activating some of his signature Sandler voices during the offer, but ultimately passed in favor of professional duties.

“It was one of those angel-devil moments,” he said.

Cohen, now 45, still harbors so much regret that he even made a documentary about the experience, titled “Finding Sandler.”

“This was my opportunity to get into the inner circle of a comedy legend,” Cohen told The Post. “Adam helps out people he likes and always works with his friends.”

When Cohen turned 30 in 2006, he embarked on a cross-country journey to put himself on Sandler’s radar, even making a visit to Sandler’s favorite breakfast spot, The Red Arrow Diner, in the small New Hampshire town of Nashua.

Cohen claims that a year after he began production, Sandler’s manager phoned him to request he end the project (a representative for Sandler subsequently denied this), but Cohen continued to truck on with his obsession.

The 45-year-old has yet to score that coveted drink, but if there’s a silver lining to this grueling two-decade-long saga, it’s that David met his wife through his personal tragedy.

In 2019, his Hinge profile noted that blowing off Sandler was his biggest regret in life. Cohen got married last year, but the first time his now-wife wrote to her future husband on Hinge, she wrote: “I can’t believe you passed up a drink with Adam Sandler!”

Moral of the story: Regrets die hard and never pass up an opportunity to drink.