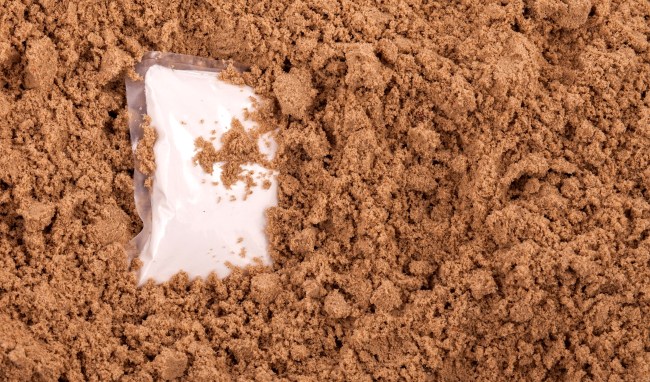 Visiting a beach on the Atlantic Ocean must be similar in nature to a treasure hunt because it seems like every other month someone finds a bunch of cocaine either washed ashore on the beach or just floating out in the water.

$880,000 worth of cocaine floating in the water off Key West, $600K worth of coke found by a family in South Carolina, a fisherman who reeled in another $1 million worth of the white stuff in The Palmetto State, bricks of cocaine washed ashore after a hurricane, you never know when you’re going to stumble upon hundreds of thousands of dollars worth of blow.

Case in point, last week U.S. Border Patrol agents seized over $1 million worth of cocaine after a beachgoer in Hollywood, Florida came across a bunch of it washed up on the shore.

When the beachgoer found the 30 packages of cocaine weighing 78 pounds, he reportedly called the Hollywood Police Department, who then turned over the $1 million worth of coke to the Border Patrol.

On Monday, a beachgoer discovered 30 packages with 78 lbs. of cocaine that washed-up at #Hollywood Beach #Florida. Miami Sector #BorderPatrol Agents seized the narcotics, valued at over 1 million dollars. Thankfully, the 78 lbs. of drugs didn’t make it into our community. pic.twitter.com/34Fk53RhaT

CNN reports that Miami Sector Border Patrol has recently responded to “multiple reports of narcotic wash-ups” on the Florida coast.

“These recent seizures represent hundreds of pounds of narcotics that will not make it into our streets or into our communities,” Chief Patrol Agent of US Border Patrol Miami Sector John Modlin said in a statement. “We are grateful for the community’s support to our border security mission here in Florida.”

He’s not kidding. In July, another $884,000 worth of cocaine and another million bucks worth of narcotics were found washed ashore by citizens on the Florida Keys coastline.

Over the weekend, #USBP #Miami Sector with support from @mcsonews seized 25 kilograms of cocaine valued at over $884,000. A concerned citizen discovered the cocaine washed-up along the #floridakeys coastline. We value the community’s support to our border security mission. 🙏 pic.twitter.com/wSgBanjtJ5

Over 1 million dollars in narcotics seized by Miami Sector #USBP Agents & @CBPAMO in the #FloridaKeys. Agents seized 35 kilograms of a cocaine that washed-up along the coastline with the assistance of a #GoodSamaritan. Call (877) 772-8146 to report suspicious border activity. pic.twitter.com/1bt4UmTLgS

Based on what happened following Hurricane Dorian and with Hurricane Laura having recently hit the area, expect to see a lot more stories like these in the coming weeks.