The Unkillable Ben Affleck Had A Better Weekend Than You 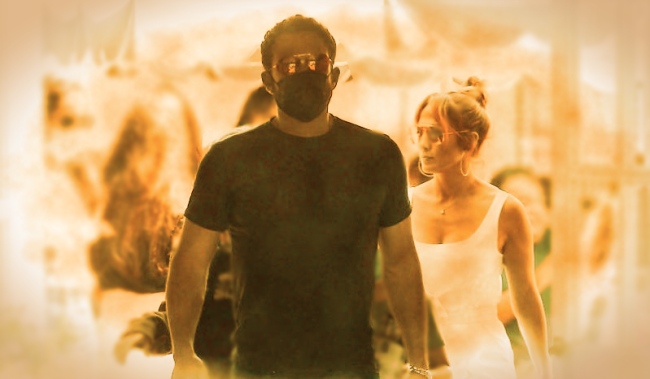 Benjamin. Géza. Affleck-Boldt. Ben Affleck as he’s known professionally. Or, as I like to call him ’round these parts, Slick Benny. Folks, perhaps it’s redundant of me to say, but Slick Benny had a better weekend than us.

Saturday was Jennifer Lopez’s alleged 52nd birthday. I say allegedly because, given her apparent de-aging, she’ either a clone, not of this Earth, or suffering from the Benjamin Button disease. Presented with those three options, especially considering the rampantness of conspiracy theorists these days, I’d definitely prefer Door Number Three: Benny Butts Disorder. But back to the other Benny and Jenny’s 52nd birthday, which Jeremih once wrote a song about.

This guy is simply unkillable, both personally and professionally. Sort of like Tom Hardy’s character in Lawless. He’s the walking embodiment of “minor setback for a major comeback.” Falls off the wagon? Gets back on. Makes a shitty movie? Follows it up with a banger. Breaks up with one Hollywood A-lister? Reunites with another. Loses Ana de Armas? Winds up on a yacht with his thumb halfway up, as the great philosopher Jules Winnfield once put it, J-Lo’s Holiest of Holies for some Vitamin D — that’s a Sun pun right there — lovin’. This dude bounces back more than the late-night text messages A-Rod is probably sending J-Lo from his recently blocked number. He’s turned redemption into an art form. Ben Affleck is unkillable.

the phoenix must burn
to rise from the ashes pic.twitter.com/ydMR29TXdM

Both Marc Anthony and Jen Garner for the last few months must be like… “Guess I’ll take the kids AGAIN this weekend.”

"Time is a flat circle" pic.twitter.com/DmkG0P1sce

Ben Affleck got himself in better shape for J Lo again than he did to play Batman pic.twitter.com/kpUqxlFk9c

Ben Affleck better not fuck this up for us

I need to take a personal day off of work to unpack why I thought "This is huge for us!" when I saw the new photo of Ben Affleck and Jennifer Lopez.

even in this idyllic situation, ben affleck is constitutionally incapable of producing any facial expression other than ‘i just lost custody of my son’ pic.twitter.com/aRcR3Tq76J

ben affleck is western society's greatest work of art, a man who has benefited from unimaginable wealth and fortune and whose face always looks like he just escaped a Russian POW camp https://t.co/PNYlSDXSCi

Ben Affleck and Jennifer Lopez in 2002 and 2021 ❤️ pic.twitter.com/kCZOsNpLof

Diddy after he saw the pictures of J Lo and Ben Affleck celebrating her birthday on a yacht pic.twitter.com/Kqd4Izbo48

I know Ben Affleck does not need my concern, but I can't help but worry about how bad a tattoo he'll get if Jennifer Lopez breaks up with him. I'm picturing a full chest and stomach rendering of Spartan soldiers defending Fenway Park from a siege.

enjoying myself touching a butt, then i remembered instances of regret in my life, and pain i have caused others pic.twitter.com/qJOlW0nYKC

Ben’s also got a handful (two puns for the price of one in this article, and on a Monday no less, you’re welcome) of films due out this year, as he’s set to star alongside his buddy Matt Damon in Ridley Scott’s The Last Duel and in the lead role of George Clooney’s next directorial effort, The Tender Bar. Then, in 2022, he’ll star in the romantic thriller Deep Water alongside his ex-flame Ana de Armas, and will put on the cape and cowl for one final time when he plays Batman in The Flash.

RELATED: Internet Reacts To Matt Damon And Ben Affleck’s Absurd Haircuts In Trailer For ‘The Last Duel’, Which They Also Wrote