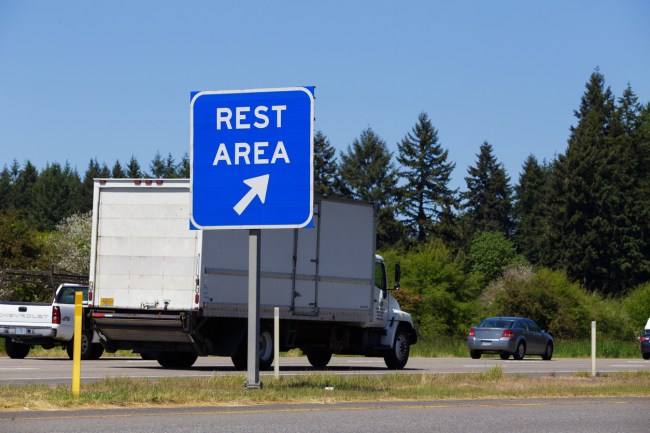 It’s officially road trip season, folks. Now is the time to hop in the car and drive to the beach, a buddy’s wedding, or (god forbid) visit family.

No matter where you’re headed, you’ll need to make a pit stop somewhere if the destination is more than three hours away. Nature is going to call at some point (as she so often does) and you’ll subsequently be forced to veer off course to do what you’ve got to do.

However, not every place that provides you with an opportunity to empty your bladder is created equal, which is why I’ve taken the liberty of ranking the most common road trip rest stop options.

Gas stations are the most readily available rest stop option but there’s a definite “quantity over quality” tradeoff.

You never really know what you’re getting into with the commodes at these places, and if you’re in the midst of a “shoot across three lanes of traffic” kind of emergency, it could offer surprises that will make an already terrible road trip worse.

Sure, there’s always the chance that you’ll be pleasantly surprised by the level of cleanliness, but it fluctuates between “I can live with this” to “Let us never speak of this again.”

Some of these places have gotten so out of hand that the facilities are kept under lock and key. This forces the same person who rings up the purchase you usually have to make to gain access to serve as the official Bathroom Czar and size you up to determine if you can be trusted with the key (which is usually attached to a giant object). I’m not sure what you’re supposed to do with that massive thing while you do your thing, which leads me to believe that it’s filthy on a level I don’t care to comprehend.

These places are an absolute last resort—like an “everything else is closed because it’s a holiday and you had a breakfast of leftover Chipotle and black coffee” kind of last resort.

9. The Gatorade Bottle That’s Been Rolling Around Under Your Seat For Months

It gets points for being available when called upon and will get the job done, but there are certainly more dignified methods of relieving yourself.

When you’re being held captive by a toll road, your options are almost completely limited to those generic service stations dotted along the highway. They’re like gas stations crossed with a weird food court that consists of restaurants you’ve either never heard of or could’ve sworn went out of business years ago.

Sure, you can usually grab a cup of coffee or a subpar sandwich—which is nice—but cleanliness is an afterthought. After all, when people have no other options when it comes to stopping, there’s very little incentive to clean up the aftermath of a long-haul trucker’s visit to the facilities.

Fast food joints are ubiquitous to a point where some people would argue there’s too many for the public good. Those people have obviously never had to alleviate some abdominal pressure in the midst of a cross-country roadie.

All you have to do is swing into the good ol’ Golden Arches (or whatever grease trap suits your fancy) and bypass the entire food operation and make tracks for the lavatory. Are they pretty? Absolutely, unequivocally no, but the fast-food restaurant john gets the job done. Afterward, you’ll be glad they’re around in such massive numbers.

These may be a largely overlooked option but the humble visitors center is an underappreciated gem.

They’re typically the first thing you’ll see when you enter a new state (or occasionally the second after a giant fireworks emporium). First impressions are huge and a state’s economy can’t afford to squander tourist dollars because of desecrated bathroom facilities.

Plus, you can load up on brochures for aquariums and museums devoted to incredibly niche things, which leads me to the next best type of rest stop…

The roadside attraction takes everything the visitors center has to offer but offers the added benefit of giving you the chance to grab a few sweet pics for the ‘Gram.

Is there anything better than following up a much-needed visit to the bathroom than standing in multiple states at the same time or posing in front of a giant cowboy boot? Well, yeah, there are plenty of things better than that but you’re on a road trip so that’s probably the best you can do given the circumstances.

These offer all the amenities of a regular gas station with a little more class and dignity.

I’m talking about the Wawas and Sheetz of the world (or whatever comparable establishments they have in other parts of the country); the types of gas stations where you wouldn’t be judged if you told someone that’s where you got dinner.

My theory is that the expanded food operation necessitates an increased eye for cleanliness. However, they can still fall victim to the same pitfalls as regular gas stations so you need to keep that in mind.

Hotels are a personal favorite for me. They’re usually close to the highway, which means they can make for a quick in-and-out pit stop since there’s usually going to be a restroom in the main lobby.

All you have to do is park your car, walk in like you own the place, and head straight for the bathroom and shout a random number above 100 if someone questions what you’re doing there.

It’s worth noting this method works well at your standard chain hotel, but if you’re feeling brave and want a five-star rest stop experience, you can try it at a Four Seasons or something. Just know it might not end well.

In my opinion, there aren’t many better ways to connect with nature than urinating on a small part of it.

The beauty of nature is that it’s easily accessible and the view can’t be beaten. I’d even go as far as to say the view outside is even better than in one of those bathrooms where they put TVs over each urinal.

One important thing to keep in mind about marking your territory outside is that it’s not the safest option on this list. Taking a leak outside is like kicking an extra point: under perfect circumstances, it shouldn’t be an issue. However, all it takes is a rogue crosswind when you’re not expecting it to leave you completely embarrassed.

If you’re looking for the best bathroom visit— no, experience—look no further than Cracker Barrel.

The smiling Cracker Barrel guy is a beacon that guides you into the parking lot. Right off the bat, the southern hospitality is on full display. If the walk from the car to the front door is too taxing for you, there’s an armada of rocking chairs waiting for you to take a load off and maybe even play a few games of oversized checkers.

Then you walk through the front doors and into the general store. There, you can purchase an array of tchotchkes, merch for the local college football team, weird DVDs, and old-timey toys like pop guns, paddle balls, and those things where you give the cartoon guy mustaches made out of metal shavings.

That’s a decent rest stop if it ends there but Cracker Barrel ups the ante by being a full-service restaurant. They had the number one spot locked up even before the recent announcement that booze was being added to the party. You’ve got to love seeing the best do whatever it takes to get even better. It’s inspiring.

When I was growing up, The Barrel was my family’s rest stop of choice. In fact, I didn’t even discover Cracker Barrel’s primary purpose was as a restaurant and not as a building that housed toilets for weary travelers until I was a teenager. I just thought it was weird that people were eating at a place where others only stopped to pee.

It turns out I was wrong. I’m not sure if this belief is a byproduct of my dumbness or Cracker Barrel’s stellar rest stop service, but I like to think it’s the latter (even though I now know full well it’s the former).