What’s The Best Way To Cook A Steak? 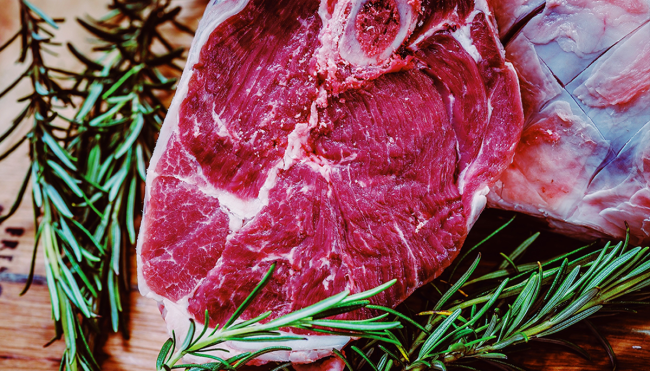 If the guy I know on Facebook who’s way too into Paleo is telling the truth, giant hunks of meat have been bringing humans together for tens of thousands of years.

Society has evolved a bit since the Ice Age but certain things remain unchanged. I might not know what it’s like to hunt down a mammoth for food but I do know that eating copious amounts of steak with other people is one of the best bonding experiences out there.

As a lifelong carnivore, I’ve picked up plenty of tips and tricks concerning how to cook a steak over the years.

However, I’ve never really sat down to seriously examine the most important question of all: What’s the best way to cook a steak?

If you said “not well-done,” you’re technically correct, but the real answer is a bit more involved.

I spent some time supplementing my personal knowledge with advice gleaned from a variety of culinary resources, and while there’s a chance this guide will start more arguments than it solves, my hope is that it can help you take your steak game to the next level.

Picking Out Your Steak 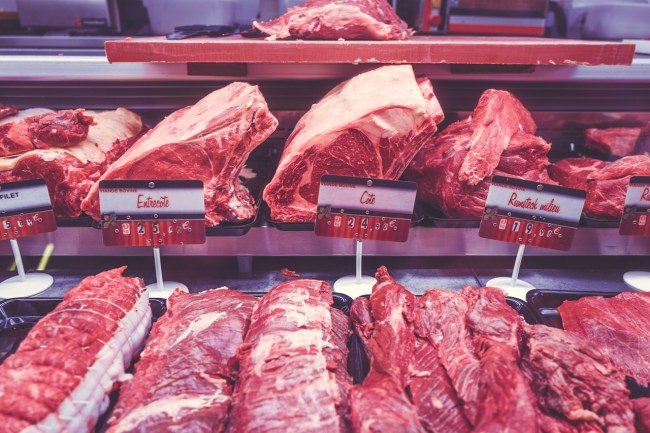 A good steak starts with a good butcher (or a Costco membership). A lot of grocery stores offer thin cuts you can pick up for cheap in the meat aisle, which is a good option if you’re in the mood to know what sadness tastes like.

When I say “steak” in this article, I’m referring to a slab of beef that’s at least one inch thick and makes you resist the carnal urge to tear into a chunk of raw meat when you look at it.

It’s worth noting that grass-fed beef might be all the rage but the meat from those cows contains less fat compared to grain-fed cattle, which is great for them but not so great for your taste buds.

Here are some of your best bets. 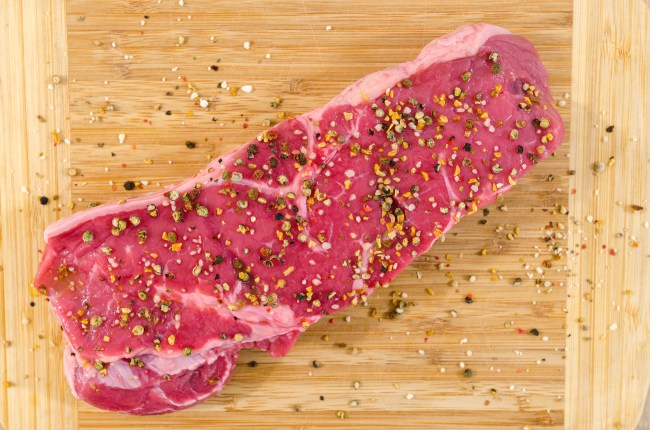 Compared to the following options, the strip steak is a leaner cut but still contains more than enough fat to stand on its own (unlike the likes of the skirt and round steaks, which usually need a Rascal scooter in the form of a marinade).

You can get strip steak with or without the bone, and while some people say the former tastes superior, the evidence seems to indicate otherwise. 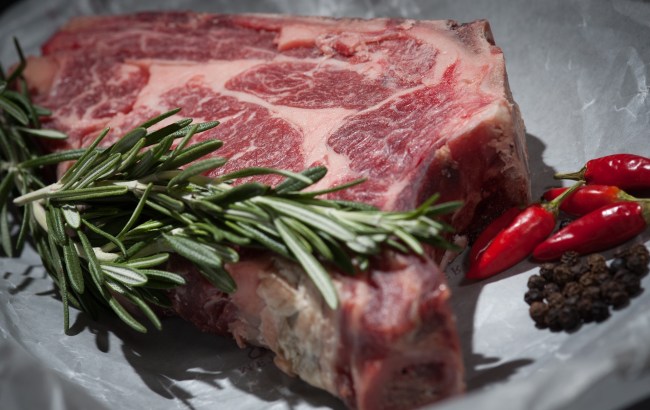 This is personally my favorite cut in existence. The ribeye contains more fat than any other section of the cow and results in an incomparable flavor when prepared correctly.

If you’re feeling particularly daring, you can pick up a “tomahawk,”, which features a bone extending out of the cut that makes it kind of a pain to cook using some methods but looks pretty awesome. 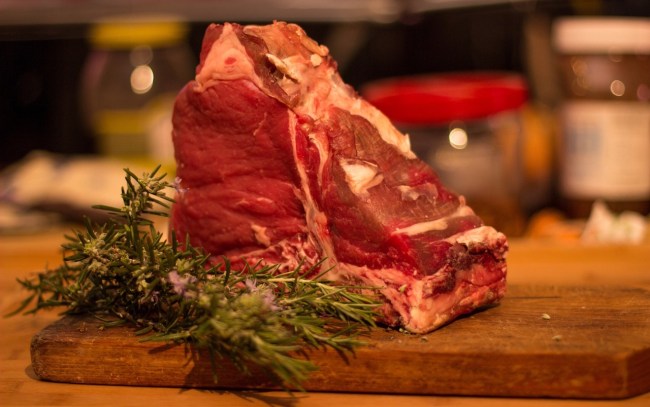 The porterhouse might be the quintessential cut and what most finance guys order at The Palm when they’re abusing the company card.

A thicker version of a T-bone, the porterhouse consists of a strip steak on one side and a filet on the other. If you’re looking for the best of both worlds, this is the one for you. 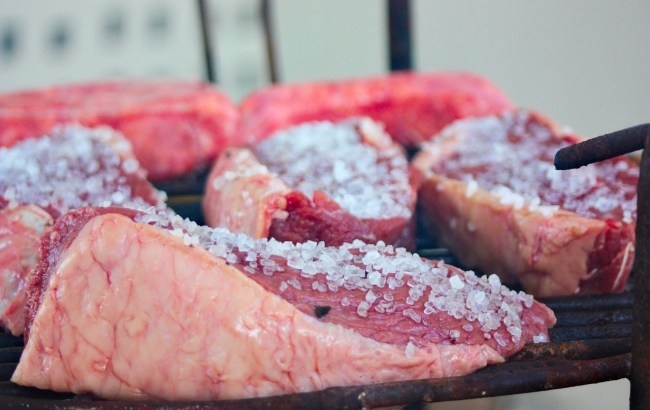 Unless you buy your steak from a guy with a wheelbarrow full of beef who assures you it isn’t human meat (even though you never asked him), you’re probably going to have to drop a solid chunk of money if you want one of the prime cuts.

However, if you’re not also willing to invest some of your time to get the steak ready for cooking, I’d strongly suggest you save yourself the trouble of having to go to the store and simply light a $20 bill on fire instead.

>The key to transforming a good steak into a great steak is to season it, which is done by liberally covering your beef with kosher or sea salt on all sides. This is not the time to worry about your blood pressure— you want your steak to be as salty as a girl who didn’t get the car she wanted on My Super Sweet 16.

Once it’s been seasoned,  throw the steak on a cooling rack above a sheet pan covered in foil and stow it in the fridge. Without getting too deep into the science, this dry brining process will break down the muscle and allow the salt to penetrate the surface and flavor the meat.

In theory, you can get away with letting it sit for an hour (at the very least), but if I learned anything from Jennifer Aniston’s manager at Chotchkie’s in Office Space, it’s that you should never settle for the bare minimum— I personally shoot for at least 24 hours but you can even go a couple days if you’re not in a rush.

Thankfully, we now have the knowledge we need to set out and answer the question that brought you here in the first place: What’s the best way to cook a steak? 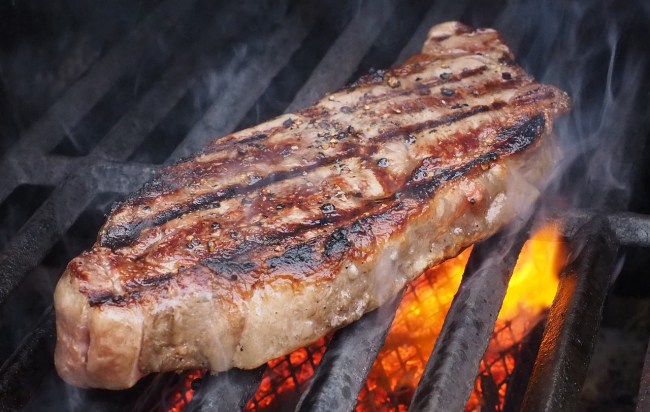 This might be a Hot Take in every sense of the phrase but try to bear with me.

Throwing meat over an open flame is one of those primal rituals where the experience you have while cooking is just as important as the outcome. As a result, I totally understand the appeal of grilling, but it feels like the ceremony makes people think the steak taste better than it actually does.

Grilling a steak is probably my least favorite method when it comes to the final product but that doesn’t mean you can’t make a damn tasty meal (because, after all, steak is still steak).

Here’s the process you’ll want to follow if you’re looking for a perfect medium rare, which I’m going to assume you are regardless of the cooking method in question (you’re going to want to grab a good quality instant-read thermometer for maximum accuracy).

If you follow these steps, I doubt you’ll be disappointed, but I think you’ll enjoy the rest of these cooking strategies a bit more (even if they won’t give you those sexy grill lines). 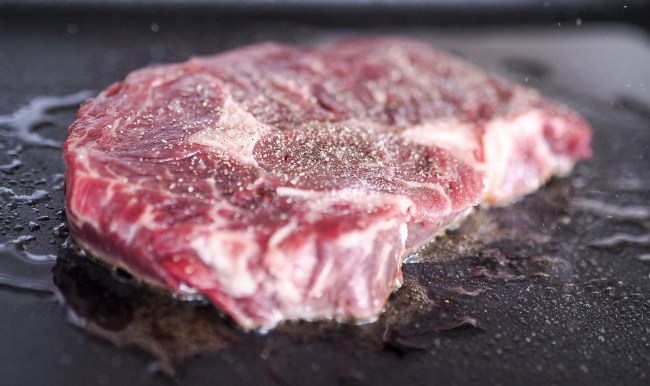 Getting the perfect crust is what separates a great steak from a good one, which is why salting the steak well ahead of time is a vital step in the process.

Doing so draws out moisture from the meat, so you should pat it off before cooking. Having a dry steak will accelerate the Maillard reaction, which causes the outside to caramelize.

You can get a fair amount of crust using a grill but I’ve never come close to getting the results I’ve consistently gotten by pan searing (the method favored by Bill the Butcher in Gangs of New York).

However, we’re going to help you get a much better crust than he did.

If you want to give pan searing a shot, you should know that you’re probably going to smoke your place up unless you have a solid oven hood. However, you can throw a cast iron pan on the grill and get the same results.

If you don’t have a cast iron pan, you should definitely pick one up.

Here’s the path you want to follow once your steak has been prepared long enough for your liking:

If you really hate your arteries (but love your taste buds), I suggest drizzling some of the remaining juices in the pan on your steak once you slice it. 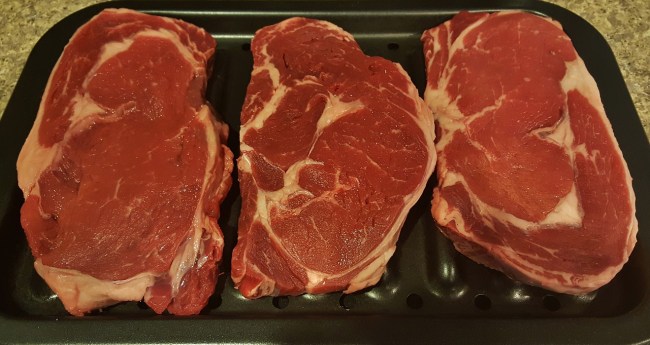 Cooking with direct heat is the simplest (and most common) way to prepare steak but the nature of the method means the meat near the exterior will cook at a faster rate than what’s in the center.

The impact of the cooking style can be observed by examining the “ring” that forms outside the meat over the course of its time in the pan (or on the grill) that indicates how far into the steak the heat was able to penetrate.

Here’s an example from when I pan seared a couple of NY Strips. 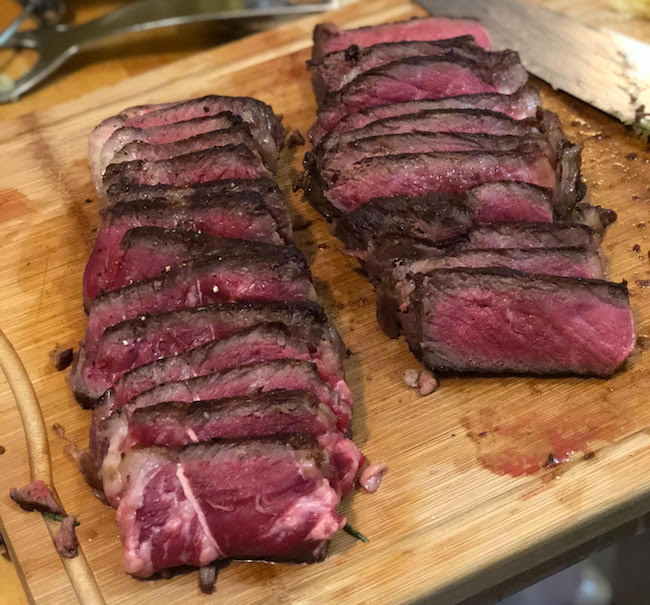 If George Clooney’s hair has taught me anything, it’s that a little bit of grey isn’t the end of the world, but that doesn’t mean it hurts to take steps to avoid it.

If you’re working in a kitchen without any culinary bells and whistles, it’s time for you to bring the reverse sear into your life and leave your old one behind.

I first became aware of the reverse sear thanks to J. Kenji López-Alt of Serious Eats, who has basically become the authority on steak in recent years (and consequently has his fingerprints all over this article).

The concept has evolved a bit since it was first dreamt up a couple of decades ago but the principle remains the same. Going low and slow makes the steak more tender, cooks it more evenly, and dries the surface, which results in a better sear at the end.

Assuming you didn’t skip to this section before reading everything that came before it, you should know how to prepare your steak ahead of time by now. Here’s what to do once you’re ready to cook it:

The reverse sear is probably the best option out there for a casual chef, but if you’re serious about your steak game, there’s only one method out that rules them all. 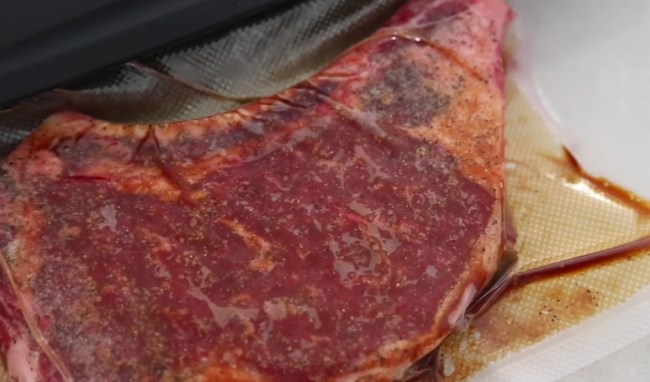 Contrary to what Charlie Kelly might have you believe, there are few— if any— situations in life where the correct way to prepare a steak is to boil it (especially if there’s milk involved).

However, the same can’t be said for lightly simmering one.

Sous-vide is a cooking process that’s only been relatively recently introduced to amateur cooks after decades of being perfected in professional kitchens. The method involves vacuum-sealing food and using indirect heat in the form of a constantly-circulating water bath to cook it to perfection.

When I first heard about sous-vide, I was immediately skeptical. You couldn’t convince me tossing meat in a plastic bag and throwing it in some warm water for a few hours could somehow result in the best steak you’ve ever tasted.

Then I tried it.

Like the reverse sear, sous-vide harnesses a low-and-slow cooking method in pursuit of maximum tenderness. It gives you unparalleled control over temperature and doneness, as it’s impossible to overcook the steak (at least in a traditional sense).

Much like Toad Style kung-fu, when sous-vide is properly used, it’s almost invincible.

You should note that unlike other methods, you should not salt the meat ahead of time when sous-viding a steak (doing so can give it an odd, cured taste).

Assuming you have all of the equipment required— you’ll need a circulator in addition to a vacuum sealer— the perfect steak is shockingly easy:

You should be forewarned that sous-viding a steak has the potential to seriously impact your ability to enjoy steaks prepared in a traditional manner.

I apologize in advance for making it hard for you to ever look at a steak the same way ever again.