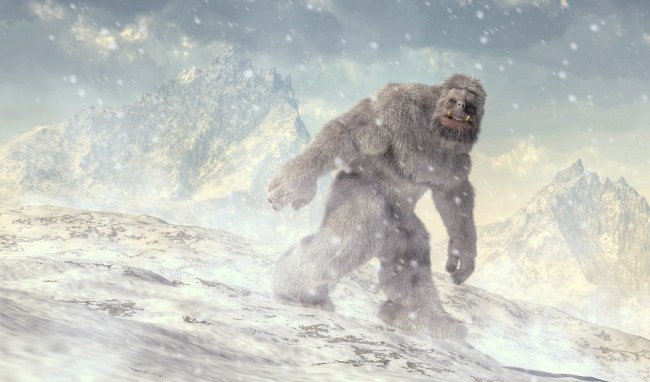 It’s been pretty quiet on the Bigfoot front the past few months. We did have one Sasquatch sighting back in December in Singapore where they call him Bukit Timah Monkey Man or BTMM.

The fact that he goes by a different name there is not unusual. According to Google Maps, Bigfoot goes by 58 different names around the world – he’s that well-known.

This newest sighting of Bigfoot occurred in the Great White North in the small town of Silverton, British Columbia, Canada.

Apparently, Bigfoot (is he called Yeti up there?) was spotted back on December 25th, according to the Bigfoot Researchers Organization. (Yes, that is a real thing.)

…four friends were heading to their home on Hwy 6 just south of Silverton on the evening of December 25 when the people in the front of the vehicle saw what looked like a “huge, man-like figure” on the side of the road.

“I didn’t see the creature myself, I saw the prints,” says Erica Spink-D’Souza, who was in the back seat. She’s become the informal spokesperson for her companions. “But the person on the front seat cried out ‘Oh my gosh look at that!’”

“They said it looked like a huge grizzly, or it was a large man, standing up.”

But before Spink-D’Souza could catch a glimpse, the figure turned, went on all fours, and headed deep into the bush.

“We tried to turn around and look again, but it was gone,” she says.

Members of the group were so gobsmacked by the sighting they decided to head back to the area later that night to investigate. What they discovered blew their minds even more.

“We saw all these different tracks, and then we saw these tracks that were really alarming,” Spink-D’Souza recalled. “They were bipedal tracks in a straight line into the woods…

“I got a little spooked, it was alarming to see such big prints. But there were no bear tracks.”

They took photographs of the scene and sent them to Matt Moneymaker, head of the Bigfoot Researchers Organization and co-host of Finding Bigfoot on Animal Planet Channel from 2010 to 2017.

Moneymaker, after viewing the pics, called them “un-hoax-able.”

“The surrounding pristine snow proves the tracks were not fabricated by humans,” he said. “The stride length is beyond the ability of a human trying to leap through knee-deep snow. The drag marks and depth of the tracks prove they are not from a leaping rabbit. The linear pattern shows that it was not a bear.”

None of this, however, came as a surprise to many of the locals.

“People were saying ‘oh, that’s The Wanderer, there’s a sasquatch who wanders around here,’” said Spink-D’Souza. “It sounds like around here people are pretty open to the possibility there is one.”

10 days later members of a local Okanagan Bigfoot group visited the site and stated that they believed the footprints were more likely that of a moose.

No one in the area was buying that explanation though.

Moneymaker contacted the owner of the property where the sighting occurred and claimed to have heard “moaning howls” recently outside her home. When Moneymaker played a played a recording of “the Ohio howl” from 2015 and she said it was a match.