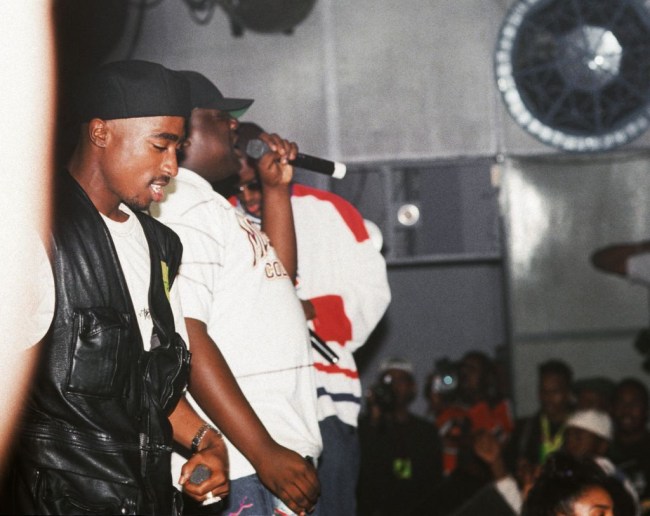 According to a songwriter, there are lyrics in Biggie Small’s Hypnotize that were written about Faith Evans following rampant rumors that she had cheated on The Notorious B.I.G. with Tupac Shakur. Frequent Tupac collaborator Delray Richardson revealed the lyrics from Biggie’s 1997 classic that had a subliminal message to his wife about rumors that his wife cheated on him with his West Coast rival, Tupac Shakur.

Richardson is a platinum-selling songwriter who has recorded songs with Dr. Dre, Melle Mel, the Sugar Hill Gang, Eminem, 50 Cent, The Game, and Tupac. In a recent interview with The Art of Dialogue, the Tupac collaborator said that Hypnotize had a secret message to Faith Evans about cheating on him with 2pac.

Hypnotize was a posthumous release for Biggie when it dropped on his Life After Death album on March 25, 1997. Smalls was gunned down in a fatal drive-by on March 9, 1997. But before he was robbed of his life at the young age of 24-years-old, there were rumors swirling that his wife Faith Evans had been unfaithful and been seeing Shakur for some time.

Richardson says that the lyric that Biggie refernces Evans in Hypnotize is: “Dare I squeeze three at your Cherry M3, bang every MC easily.” Wallace was making a reference to shooting at Faith’s M3 BMW that she was driving during that encounter with Tupac at the Hollywood Athletic Club. In an episode of Drink Champs, Evans said Treach first introduced them, which Richardson flatly refutes and says they had definitely met before the meeting at the Hollywood Athletic Club.

Faith appeared on Tupac’s Wonda Why They Call U Bitch track from 1996. Faith says that when she went to collect her $25,000 for the track that Tupac invited her to his hotel and allegedly asked her for oral sex.

“[He asked] in a very surprising and offensive way for sure. By that time it was pretty clear to me, it seemed to me that that was kind of like a plan,” Evans said. “I kind of allowed myself to be played and allow myself to get into this situation, because this is totally not how I operate, that ain’t how I do business and that was never up for discussion as far as that being an exchange. That’s not what it was about.”

RELATED: Suge Knight’s Son Said He ‘Got Pac Back In The Studio’ And The Internet Is Wondering If Tupac Is Alive

In Tupac’s 1996 diss track Hit ‘Em Up (Which is Eminem’s favorite diss track of all-time), Pac went after Biggie hard, “You claim to be a player, but I f*cked your wife.”

Biggie also had a line about Evans and Tupac in the Brooklyn’s Finest collaboration with Jay Z. “If Faye has twins, she’ll probably have two ‘Pacs.”

Delray recently shared one of the last photos of Tupac Shakur, only days before he was fatally shot on September 7, 1996. Pac can be seen sitting in his brand new customized 1996 AM General Hummer H1 Hardtop with a V8 engine on LaBrea and Sunset Boulevard in Los Angeles

In late August 1996-just a few days before Tupac was shot and killed in Las Vegas, Delray Richardson, took his two home girls Nanette Nick and Ingrid Hicks from Maryland, sight seeing in sunny California. Driving west on infamous Hollywood Blvd, they made a left on La Brea and got stuck at the light on Sunset Blvd. and La Brea Ave. There, Delray spotted the black Hummer and said to his friends, "There's Tupac right there in his black Hummer" as he was making a right turn onto LaBrea from Sunset Blvd. That's when Nanette and Ingrid yelled, "Catch up to him Delray!". Delray calmly said, "It's all good, I got you!". As they pulled up alongside Tupac at the red light on Fountain and La Brea, Delray said, "Yo Pac, these are my homegirls from Maryland, they wanna take a picture with you." Tupac kindly said, "I can't get out of my car because there's too much traffic." So Delray grabbed the camera and passed it to Nanette and said, "Take a picture, it's better than nothing". At the same time, Ingrid said to Tupac, "Tupac, can I ask you a question and he replied, 'Sure baby'". Ingrid said, "How many times did you get shot?" (Referring to the 1996 shooting at Quad Studios) And that's when Tupac put up his 5 fingers and said "Five," as Nanette simultaneously snapped the picture. And that all took place while stopped at a red light in Hollywood. Tupac was shot again on September 7, 1996 in Las Vegas and passed away on September 13, 1996 from the gunshot wounds. Richardson met the late Tupac Shakur at Bowie State University. They later co-wrote “One Day at a Time,” which was redone by Eminem for the oscar-nominated documentary “Tupac: Resurrection” and it also appeared on the soundtrack. It was renamed Em’s version. Delray has been named co-writer next to some of the biggest names in hip-hop history like Tupac, Eminem, Dr. Dre, 50 Cent, Melle Mel and The Game. By. Delray Richardson / Nanette Nick. This photograph and story behind this photograph is copyrighted. Any reproduction without written permission is a copyright violation. #Tupac #LebronJames #hollywood