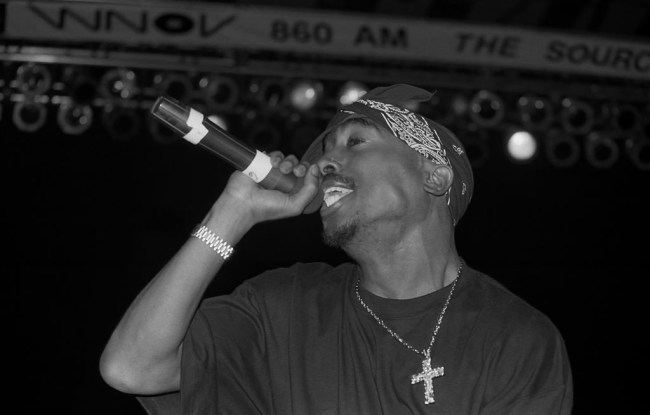 In October of 2018, Suge Knight’s son made headlines by saying that Tupac is alive and living in Malaysia. Now Suge Knight Jr. has made another eye-opening declaration about Tupac Shakur. In an Instagram post shared on Friday, the son of the Death Row boss said, “I GOT PAC BACK IN THE STUDIO. NEW MUSIC COMING.”

Suge Knight Jr. wanted everyone to understand that this is not a hoax and added, “This ain’t a joke. #NewDeathRow ??/?? Coming soon.” He added another Instagram post that said, “I NEED THE HOTTEST PRODUCER TO WORK ON A PROJECT FOR PAC” with the hashtags #newdeathrow and #sugejknight.

The seemingly preposterous notion that Tupac is alive had the internet extremely confused. Many people on Instagram mocked Suge Knight Jr. for the post by saying it is a fake publicity stunt, he is on drugs, he is lying, he is just looking for attention, and that he was the joke for posting that he has new music from Tupac. Many people said that Tupac is dead and that these “new songs” will be remixes of previous audio from over 20 years ago. Others wondered if Tupac is really alive and ready to get back in the studio and the limelight.

Suge Knight Jr.’s cryptic post about Tupac in the studio could very well be a marketing ploy for the website NewDeathRow.com, that sells clothing with Death Row’s logo on it.

In November, 2pac’s official Instagram account teased that a new album was dropping, but it ended up being Tupac’s greatest hits in clear 4LP vinyl.

There have been many conspiracy theories that say Tupac faked his death and is still alive. For those who don’t believe that Tupac Shakur is still alive, the legendary rapper was shot four times during a drive-by shooting on the Las Vegas strip on September 7, 1996, after attending the heavyweight fight between Mike Tyson and Bruce Seldon at the MGM Grand.

In the past, Suge Knight has stated that Tupac Shakur is still alive.

However, Knight has also gone on the record to finger Tupac’s killer. Knight claims that he was the real target of the deadly drive-by shooting and Tupac was collateral damage. Knight believes that his ex-wife and former Death Row Records security chief were behind the murder. The former CEO of Death Row Records claims that his ex-wife Sharitha Golden and Reggie Wright Jr. were the masterminds behind the infamous shooting in 1996. Knight also alleges that Wright Jr. was involved in the shooting of Christopher “Biggie Smalls” Wallace in 1997.

Golden has denied the accusations that Suge made in a signed affidavit. “No way in hell I would’ve murdered Tupac,” Golden said in 2017.

Marion “Suge” Knight pleaded no contest to voluntary manslaughter and was sentenced to 28 years in prison for the hit-and-run attack that killed Terry Carter in January 2015. Video captured the moment that Suge used his Ford F-150 to mow down Carter and Cle “Bone” Sloan. The Death Row founder alleges that Dr. Dre hired hitmen to assassinate him and that the rapper paid them with a check, so there is proof.