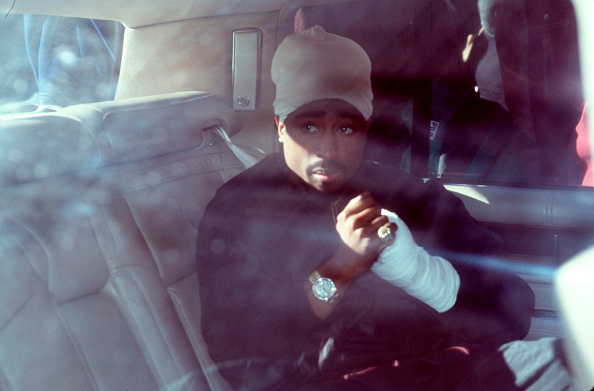 When we talk about Tupac Shakur we often discuss the night of September 7, 1996, when the legendary rapper was gunned down during a drive-by shooting in Las Vegas. Tupac died six days later from his gunshot wounds (allegedly) and how he may have faked his own death to live in peace in Cuba or Malaysia. But Tupac was nearly killed two years earlier when he was shot and managed to survive a violent and near-death robbery.

On November 30, 1994, Tupac Shakur was robbed and shot at the Quad Records Studios in Manhattan. Now, the self-proclaimed shooter is admitting that Tupac was broke and that one of Shakur’s closest friends set up the robbery.

Dexter Isaac is currently serving a life sentence for a long list of crimes unrelated to the shooting of Tupac including a 1998 indictment for murder, robbery, fraud and witness intimidation. Dexter admitted that he shot Tupac five times then stole the rapper’s chains and gun in the lobby of the Quad Records Studios. Isaac, who has served 20 years of his life sentence, claims that he was paid $2,500 from entertainment manager and convicted drug trafficker Jimmy Henchman, born James J. Rosemond.

“Jimmy, I say to you: I have kept your secrets for years,” Isaac said in 2011. “I have stayed silent in prison for the past 13 years, doing a life sentence like a real soldier should, when you and everybody have turned your backs on me … Now I would like to clear up a few things, because the statute of limitations is over, and no one can be charged, and I’m just plain tired of listening to your lies. In 1994, James Rosemond hired me to rob 2Pac Shakur at the Quad studio. He gave me $2,500, plus all the jewelry I took, except for one ring, which he wanted for himself.”

RELATED: Conspiracy Theory Says Tupac Is Still Alive And The Proof Is His Nike Sneakers

The shooting took place one day before the verdict was announced in Shakur’s sexual assault case. Now in a recent interview with Isaac, he alleges that a close friend of Tupac was the one who was behind the robbery. Speaking from the prison on Riker’s Island, Isaac gave an interview to Gully TV about the 1994 shooting and revealed that Live Squad member Stretch was behind the attack.

“Stretch set the whole thing up,” Isaac says in the interview. “He was in cahoots and was giving us the play-by-play. He was in communication with Jimmy [Henchman] who had promised him a quarter brick of cocaine.”

Shakur was rushed to Bellevue Hospital and underwent emergency surgery. Then against doctor’s orders, the hip-hop star left the hospital. Shakur arrived at the courthouse in a wheelchair hours after being shot and was found guilty of three counts of molestation.

Tupac was upset with Stretch, who was there during the robbery, for not doing anything to prevent the attack despite being unarmed. “He didn’t do what your dog is supposed to do when you’re shot up,” Tupac said of his close friend. Later, Stretch would do collaborations with the Notorious B.I.G., which only enraged Pac more. Stretch, like Biggie Smalls, was gunned down. Stretch was killed in a drive-by shooting on November 30, 1995, exactly one year after Tupac was shot at the Quad Records Studios, prompting many conspiracy theories that it was Shakur’s payback for him being shot.

Tupac rapped about Stretch track Holla At Me on the All Eyez on Me album. “How could you do me like that? I took your family in… I put some cash in your pocket… Made you a man again and now you let the fear put your ass in a place… Complicated to escape, it’s a fools fate… Without your word, you’re a shell of a man… I lost respect for you… We can never be friends.”

In the lyrics to Against All Odds from The Don Killuminati: The 7 Day Theory album by his alter-ego Makaveli, Tupac addressed the Jimmy Henchman situation. “Promised a payback, Jimmy Henchmen, in due time… Heard the guns bust, but you tricks never shut me up… Touch one of mine on everything I own…I’ll destroy everything you touch… All out warfare, Eye For An Eye.”

Isaac added that despite being a huge rap icon, he was broke. Tupac owed $7,000 to Henchman for a track he had done with Lil Shawn. Henchman knew that Tupac had no money and demanded that the rap legend pay him with cash and not a check. “Tupac didn’t have no money,” Isaac said. “Everyone thinking he had millions of dollars but that was bullshit.” Isaac added, “Nothing to do with Haitian Jack. It was all about Lil Shawn, he wanting that $7,000 in cash, and he talking reckless at Jimmy about that money.”