Bill Gates Gave Melinda $1.8B In Stocks The Day She Filed For Divorce, Translator Denies Role In Split 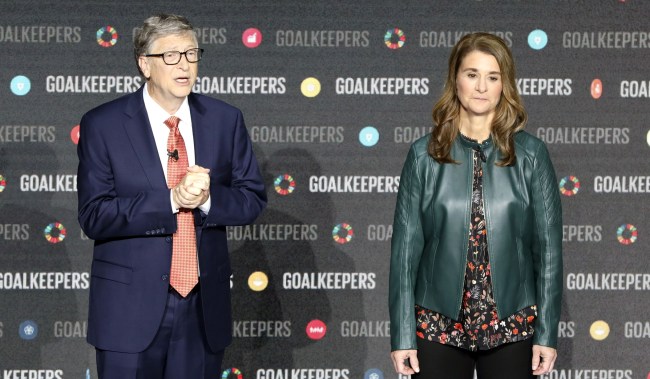 While the world waits to find out how Bill and Melinda Gates are going to split their absurdly large fortune, and what caused their divorce, we do have a few updates that have made their way to the press regarding the billionaire couple.

As we reported on Tuesday, Bill and Melinda have both hired some heavy hitter attorneys to represent them in their $146 billion divorce proceedings.

What we didn’t know then is that on the same day that Melinda filed for divorce from Bill, he transferred stocks worth over $1.8 billion to his estranged wife.

The transaction went down like this … an investment firm controlled by Bill transferred millions of shares in two companies to Melinda Monday, the same day the billionaires announced the end of their marriage.

The stocks that were transferred to Melinda included around $1.53 billion in Canadian National Railway shares plus another $310 million or so worth of shares of AutoNation.

This appears to be one of the first steps towards the division of assets as Bill and Melinda did not have a prenuptial agreement. Just an agreement that allowed Bill to take private annual getaways with his ex-girlfriend.

Speaking of Bill Gates and women close to him who are not his wife Melinda, a translator who works for the Bill & Melinda Gates Foundation, Zhe “Shelly” Wang, has had to issue a statement denying that she is one of the causes behind the couple’s split.

Wang, 36, purportedly wrote on Chinese social media site Weibo, “I thought that the rumors would go away by themselves, but I did not expect the rumors to become more and more crazily spread.”

She continued, “How many books can I read, so why spend time on the unfounded rumors?

“I would like to thank everyone for their concern and help in dispelling the rumors through private messages in the past 24 hours.”

She ended her message with a link to a story titled “#Gates divorce, some vicious people rumor to vilify an innocent Chinese girl.”

Wang’s now disabled LinkedIn profile states that she currently works as an interpreter for the Yale School of Management and Harvard Business School. She was also previously hired as an interpreter for the Monterey Institute of International Studies in September 2012, worked on numerous TED Conferences and headed up a team that translated TED events into Chinese, French, German, Japanese, Korean, Russian and Spanish.

So far, no specific reason has been released by either Melinda or Bill Gates as to why they are getting divorced after 27 years.