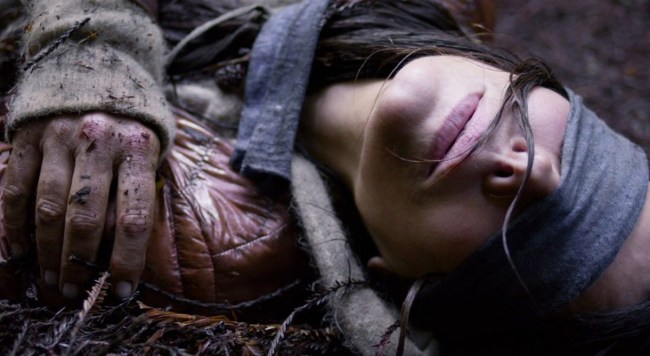 Bird Box, the Netflix movie based on a book, that spawned thousands of memes, will have a follow-up book titled Malorie coming out on October 1.

I mean, I am glad that there is going to be a follow-up book, not because I loved the story or the movie so much (it was okay), but for only one very important reason.

WHAT. WAS THE DEAL. WITH THOSE ANNOYING, MYSTERIOUS, INVISIBLE CREATURES?

As I asked back in January and still have not received a good response, “Can anyone, seriously, anyone tell me what exactly was chasing Sandra Bullock, Boy and Girl throughout the movie? And where did they come from?”

Today I would also like to add one more question to the pile: “Why are they so pissed off at human beings?”

Am I the only one who thinks that the answers to those questions ARE KIND OF IMPORTANT TO THE STORY?

Seriously, I can’t get past that. I sat through that entire movie waiting for some kind of hint as to why people were having to deal with these monsters and then… credits. So pissed.

Anyway, yeah, that’s the reason I am glad there is going to be a follow-up book written by Bird Box author Josh Malerman.

Here is what Malorie will be about, according to an interview Malerman did recently with Esquire.

“In the time between Bird Box coming out and the time since I’ve been writing Malorie, I’ve been asked a ton of times: people want to know what happened with Boy and Girl. But as much as I care about Boy and Girl, this isn’t their story. The Bird Box world is Malorie’s story, and I wanted to know more about her. I wanted to get to know her even better. At the end of the movie, I turned to my girl Allison and said, ‘I want to know what happens next!’ and she’s like, ‘Well, you know, you could make that happen,’ so it really was this warm feeling.”

“Can I ask if there’s any resolution to where the monsters come from?”

“I want to, but… I don’t want to give too much away. Let me think of a cool way to put it. I will say this: we get to know both Malorie and the creatures better.”