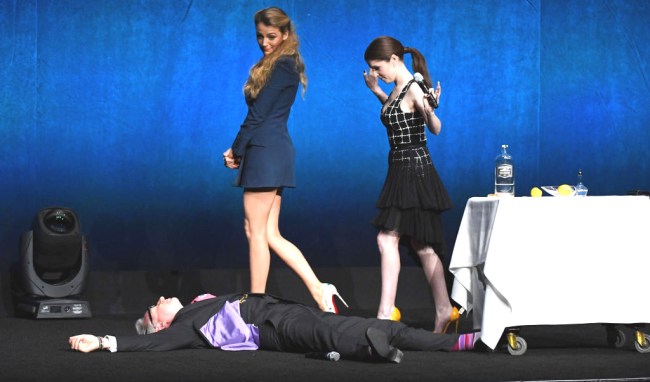 I don’t know if Blake Lively and Anna Kendrick were friends before shooting their upcoming movie A Simple Favor. I’m just glad that they are now.

That’s because now we have a third person with a high level of skill when it comes to trolling participating in the already stellar back-and-forth that happens with Lively and her husband Ryan Reynolds.

Oh darling, of all the secrets I’m keeping from you, this should be the LEAST of your concerns… trust me.

Reynolds, who recently started a Twitter beef with none other than Paddington Bear, has been caught up in a battle of wit with Kendrick ever since she and Lively ganged up on him on Instagram awhile back.

In fact, this funny little feud recently culminated with Kendrick taunting Reynolds on stage while accepting her Teen Choice Award.

As for Lively’s participation, being married to Reynolds – a master in the art of trolling – has certainly made her step up her roasting game. And she’s proven time and time again that she can give it out as well as he can when provoked.

This was the case once again over the weekend when Reynolds posted a photo with a giant picture of his face on it promoting his gin company.

“Turns out the driver really doesn’t carry cash. But he DOES carry pepper spray… and a shitload of @aviationgin #Aviationowner,” he wrote.

To which his wife replied in the comments section, “Who needs a mini van?! I’m driving this from now on. Subtle, gorgeous, and OHMYGAWDYOUREHUGE.”

The words every man wants to hear. #CommentsByCelebs

Also, well-played? Lively and Anna Kendrick answering the web’s most searched questions about them. Enjoy.