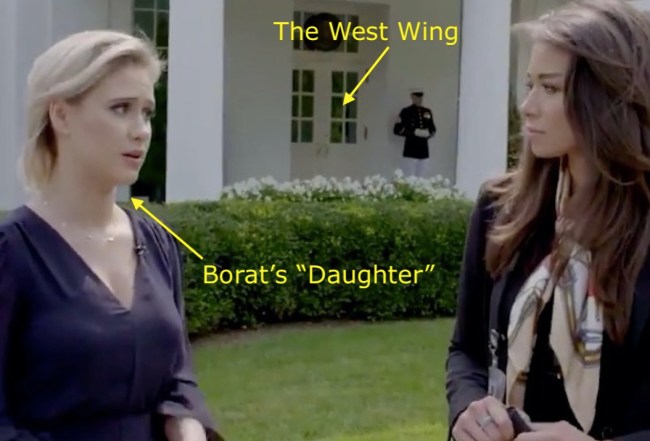 Unless you’ve been living under a rock — if so, congratulations, because that certainly doesn’t sound half bad these days — then you know the surprise Borat sequel hit Amazon Prime Video today.

A new Borat movie is newsworthy in and of itself, but Borat Subsequent Moviefilm: Delivery of Prodigious Bribe to American Regime for Make Benefit Once Glorious Nation of Kazakhstan has been making understandably bigger headlines due to its content, particularly a scene that involves Rudy Giuliani, otherwise known as President Trump’s lawyer.

While I’m not here to litigate the Rudy scene — I will say this, behavior like this is certainly not unique to Rudy or politicians — I will say that what I found most surprising was how someone like Borat and his fake-daughter-journalist could gain such unfettered access to such a politically powerful person.

As it turns out, though, Giuliani wasn’t the government-related victim of Borat’s shenanigans, as a newly released video shows that his daughter, posing as a right-wing journalist, got access to the White House, even getting to speak with Donald Trump Jr.

Trump very careful who he let into his events and house. No Covid test necessary – High 5! pic.twitter.com/Kf5gGk3n2M

Sasha Baron Cohen and the folks over at Amazon Prime Video were obviously aware of and prepared for the fallout that this film would bring, as this is now the second video they’ve released on Twitter since the Borat 2 was released, the first of which was in direct response to Rudy Giuliani, who called his appearance in the film a “complete fabrication”.

Borat Subsequent Moviefilm is currently streaming on Amazon Prime Video. In a sparse and dour year for cinematic comedies, Borat 2 is likely one of the funniest movies of the year, so it’s definitely worth your time. At the very least, at least you’ll be able to form your own opinion of some of the film’s most shocking moments.