A Moment Of Silence Please – Another Bourbon Warehouse Has Collapsed, An Additional 9,000 Barrels Lost 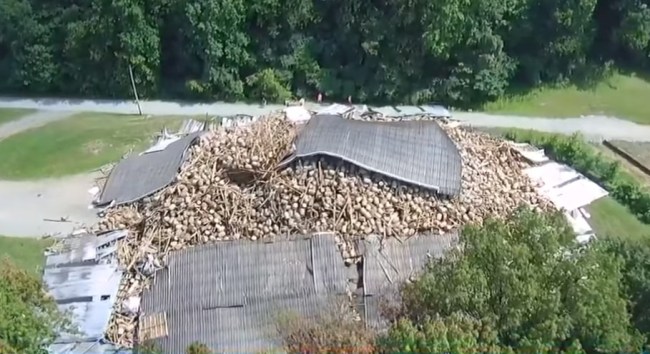 WARNING: The following article contains graphic images that some readers may find disturbing. Two weeks ago we brought you the soul-crushing story about half of a bourbon warehouse collapsing and smashing 9,000 barrels of Kentucky liquid gold. Sadly, the other half of the warehouse has fallen and another 9,000 barrels have been lost and unfortunately, there are no words that I can say to bring them back.

The national catastrophe befell the Barton 1792 Distillery in Bardstown, Kentucky on Independence Day of all days. The grisly scene was hard to swallow and bourbon seeped into the ground because barrel after barrel after barrel was smashed into wooden fragments from the storage facility’s collapse. A mountain of debris was stacked high in a gruesome display of carnage. The air was thick with the scent of whiskey and sorrow. Emergency crews were sifting through the mass destruction in hopes of salvaging a few barrels that were not demolished. With every passing minute, the search and rescue operation became even grimmer. Clouds of doom rolled in and the bleak reality that they may not find any undamaged charred oak barrels settled in. Hopelessness made a home in the former site of what once was a magnificent warehouse where bourbon blossomed.

The first bourbon apocalypse from last week had so much whiskey lost that it poisoned a local streamed and killed around 800 fish. I guess it’s true what they say, too much of a good thing can kill you. It is believed that approximately 1,000,000 gallons of bourbon were lost between the two disasters. While the barrels leaked bourbon, drinking enthusiasts across this great country dripped salty tears over the massive loss.

The only saving grace was that the tragedy happened on the 4th of July so there were no employees or cleanup crews in the vicinity. No injuries were reported in either of the accidents at the barrel-aging warehouse that was built in the 1940s. The Barton 1792 Distillery is about 40 miles south of Louisville and owned by Sazerac. This footage is more difficult to watch than the most vicious scenes from Game of Thrones.

DRONE VIDEO: The second half of a bourbon warehouse has collapsed in Bardstown, Kentucky.