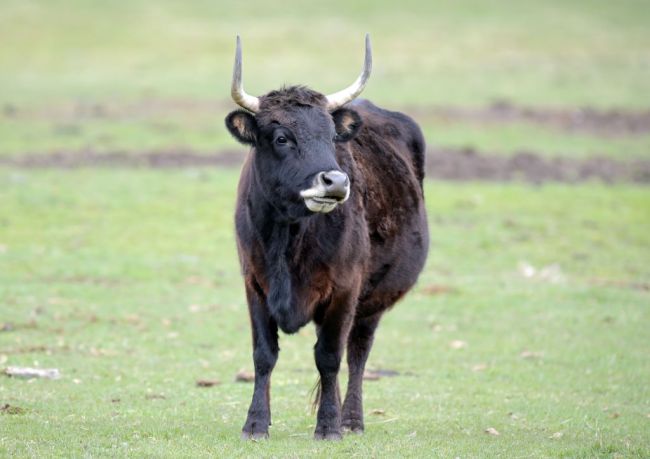 Buddy the elusive beefalo has been captured after 250 days on the run. The 800- to 900-pound beefalo, a cross between a bison and domestic cattle, was being loaded off of a truck at a meat processing plant in Plymouth, Connecticut on August 3rd when he eluded his handlers and took off running.

Over the past seven months, Buddy has made appearances on wildlife cameras set up by the police and popped up around Western Connecticut on various properties around the state. Attempts to lure him into a pen with food failed on multiple occasions and the domesticated-turned-wild beefalo continued to avoid capture. The quest to corral Buddy quickly turned into a statewide effort and the surrounding communities kept him alive by feeding him throughout the winter.

However, all good things must come to an end. Plymouth police announced his capture last week and used one of the more unintentionally hilarious images, branded “CAPTURED” as if they had caught America’s Most Wanted. A second photo shows the slippery bovine in captivity.

Police Captain Edward Benecchi said that Buddy had wandered onto a farm in town and was kicking it with some cows. He was discovered by a 10-year-old Cody Pleil, who ran back to tell his grandparents that he saw a strange cow while going to feed the other animals.

“He found a farm nearby, the farm had some female cows,” said Benecchi, trying not to laugh. “Buddy, I would say, beauty caught the beast is what I’m saying.

The farm owner was able to keep him on the property and snagged him later in the afternoon, eventually getting him into a trailer. It was no small feat.

“My grandson goes down to the gate he goes, ‘Pop Pop, a strange cow is in with us,’ and I looked and I see the horns and I said, ‘We ain’t got nothing with horns,’” said farm owner and Pleil’s grandfather Ron Rice. “I almost got killed. He slammed right into the gate to the trailer that I was holding. It happened so quick, I didn’t even have a chance to move and get out of the way.”

While Buddy’s free-range days have come to a close, the story has a happy ending for him. He was headed for slaughter when he escaped, but authorities decided early on in his escape that he would avoid the fatal outcome upon his apprehension.

The beefalo instead headed to Massachusetts for a veterinary exam, where he is said to be in very good health.

If he passes all of the physical tests this week, Buddy will be sent to the Critter Creek Farm Sanctuary in Gainesville, Florida and live out his life on 4,000 acres. Local Plymouth and surrounding residents had raised nearly $10,000 for the soon to be Floridian and he will be well taken care of in the Sunshine State. Police captain Benecchi even said that he plans to take some time off later this month to visit.

You can donate to the Critter Creek Farm Sanctuary at this link.