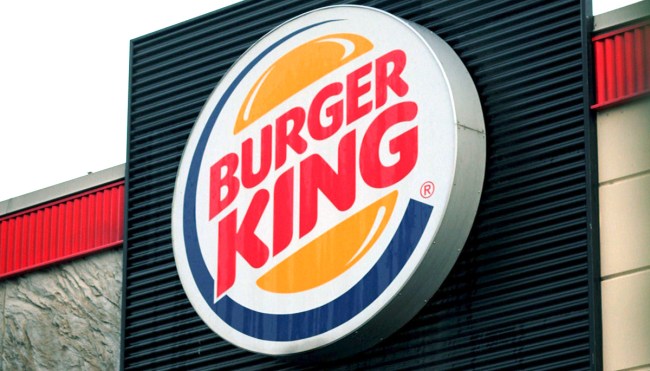 Based on what I’ve seen over the years, there’s nothing fast food chains love more than drumming up some publicity with the absurdly over-the-top items they unleash on a regular basis.

Taco Bell has perfected that art with products like a taco with a fried egg in place of a traditional shell and a burrito filled with spicy Pop Rocks. However, they’re far from alone, as highlighted by KFC opting to sell sandwiches featuring donuts and pieces of fried chicken in place of a traditional bun and Tim Hortons deciding the world needed a latte that tastes like buffalo sauce.

There’s also Burger King, which has built up a bit of a reputation for itself as the place for limited-edition items that make your poop turn a color you’ve probably never seen after going to the bathroom before. Now, it’s garnered quite a bit of attention thanks to a line of Whoppers that recently debuted in Germany that’s managed to gross people out in an entirely different way.

It’s pretty easy to see why the burgers went viral on Twitter once you take a look at the lineup of Whoppers featuring an array of bizarre toppings, including one containing vanilla ice cream and olives, another featuring eggs and bananas, and what is arguably the craziest of them all: a Whopper topped with slices of currywurst and an entire fried herring.

So, this what they be eating over there in Germany at Burger King??? HELL NAW. pic.twitter.com/94GB5QcDH9

This what the menu of burger king looks like in germany. They have to be money laundering pic.twitter.com/AQKaqbXheY

May someone of my non-German mutuals explain German Burger King to me: pic.twitter.com/ZBmVIFMblu

AH NAW, IF BURGER KING COULDNT GET ANY WORSE, GERMANY HAD TO DO THIS 😭😭 pic.twitter.com/GmxCTgGV5M

While those pictures led to people making some sweeping generalizations about Burger King’s German menu, Gizmodo notes they were actually part of a one-off promotion held in Berlin on Mother’s Day this year as a nod to unconventional pregnancy cravings.

The Whoppers themselves may have weirded people out, but at least Burger King can take solace in knowing this effort to give a nod to the women of the world went infinitely better than the time the chain tweeted about them belonging in the kitchen.