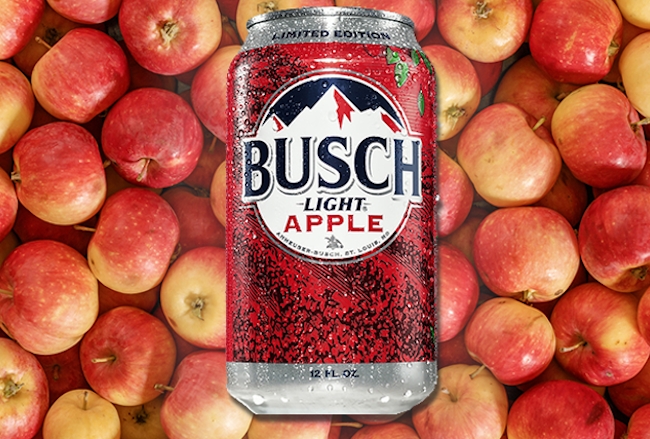 As a longtime fan of Chumbawamba (and by that I mean “a longtime fan of the only Chumbawamba song I can name”), it took me longer than I care to admit to understand why someone as intent on getting hammered as the guy in “Tubthumping” would decide to incorporate a cider drink into an otherwise pretty deadly combination of lagers, whiskey, and vodka.

To give you some perspective, I’m pretty sure I was at a birthday party at a roller rink the first time I heard that song, meaning I still had around ten years to go before I discovered the appeal of alcohol and a few more until I’d become intimately familiar with the concept of drinking to deal with the shit life throws at you.

However, I was still knowledgeable enough to notice that cider was an outlier compared to the other beverages that were mentioned, as three of them were something only adults were allowed to have and the other one was a delightful libation you drink from a paper cup emitting wisps of steam on a crisp fall day after the hayride that brings you back from the apple orchard.

A few years later, I spotted a jug of cider tucked away in the back of the fridge that I hadn’t seen before. I excitedly grabbed it and took a hearty swig before promptly expelling everything I’d swallowed (along with the remnants of my undigested breakfast) onto the kitchen floor as I unsuccessfully attempted to quell the inferno raging in my throat.

And that, my friends, was my introduction to hard cider.

That particular concoction was sourced from a picturesque mill in New England and was more akin to wine as opposed to the hard ciders that Had A Moment last decade—you know, around the time when gluten fell victim to the secret society that seemingly convenes every few years to determine what common substance that humans have consumed for millennia without any major issues should suddenly be vilified.

Gluten-free diets were already popular with the tiny sliver of the population lucky enough to have a medical condition that caused their body to violently reject it and those people saw the bandwagon flooded with millions of others eager the reap the benefits of a lifestyle championed by a number of popular books and no data whatsoever to support any of the claims within them.

If you were to study Facebook posts from the middle of the 2010s, you’d assume that anyone who’s failed at something only had gluten to blame and that removing it from your life is the first step to building a successful career that usually involves selling gluten-free tea on Facebook (you’d also probably come to the conclusion that gluten is responsible for suppressing whatever part of your brain controls your insufferability levels).

I’m not denying some people didn’t benefit from following a gluten-free diet. It’s a great way to stop yourself from inhaling empty carbs and to start incorporating healthier alternatives into your eating rotation, and with that said, you could still toss a shot of high-proof gluten down your gullet before going to bed every night while adhering to one and feel just as good.

However, no one benefited from the movement more than the people who’d been avoiding gluten before it was cool thanks to a disorder that made it impossible for their digestive system to process it. Previously, anyone who shopped in the gluten-free section was presented with about as much variety as someone trying to choose what color Model T they wanted, but capitalism did its thing as companies flooded grocery stores with new products designed with the dietary needs (and wallets) of an exploding demographic in mind.

Liquor stores, on the other hand, had already boasted a decidedly more bountiful selection of options, as wine and essentially every spirit in existence (even those distilled from grain) are inherently gluten-free. Now, when you consider how many converts cited their health as the reason for swearing off the substance, you’d think they’d also abstain from drinking when you consider there are infinitely more studies highlighting the dangers of alcohol compared to the zero concerning the negative impact gluten has on the average person. However, that wasn’t the case, and anyone who was accustomed to popping open a beer to unwind was faced with a dearth of alternatives.

At that point, hard seltzer was just a twinkle in the alcohol industry’s eye, but much like it’s easy to forget how big Emilio Esteves was before Charlie Sheen came along to steal the spotlight, there was a moment where hard cider looked like it was going to be the Next Big Thing. Over the course of a few years, the sector absolutely exploded as more and more Americans took a liking to the crisp and fizzy cider drinks that had long been a staple in the land Chumbawamba called home.

I never really got into the trend but the same can’t be said for the snakebite, a concoction of equal parts cider and lager I was first introduced to by the English owner of a bar where I used to drink too many of them while watching soccer on Saturday mornings. Some pubs in the United Kingdom refuse to serve them, but contrary to what Bill Clinton was told when he was shut down after trying to order one during a visit to the country, there’s no law explicitly banning them. There is, however, a widespread belief that they have a propensity to impair drinkers at an accelerated rate (which has less to do with any sort of mysterious chemical reaction and more to do with how dangerously easy they are to put away).

As a result, I was equal parts intrigued and skeptical when I heard about Busch Light Apple, a three-word combination I can’t say I ever expected to encounter during my time on Earth. I am a huge fan of both fruit beers and Busch Light but there’s a time and a place for each of them, and for the most part, the bars where I’ve knocked back sours in recent years aren’t the kind of places you’d expect to find the latter on the menu.

I should also note the worst beer I have ever tasted was a mass-produced, blueberry-flavored atrocity that has the distinction of being the only alcoholic beverage I poured down the drain when I was in college. Unlike what some beer snobs may lead you to believe, a fruit beer doesn’t have to be produced inside a quaint stone compound tucked away in the Belgian countryside to be good, but I was slightly wary nonetheless.

The good people at Busch Light were kind enough to send a can my way so I could sample their newest offering. After preparing myself for the worst, I recently broke out my finest snifter to see if my fears were warranted and I’m happy to report that was anything but the case. 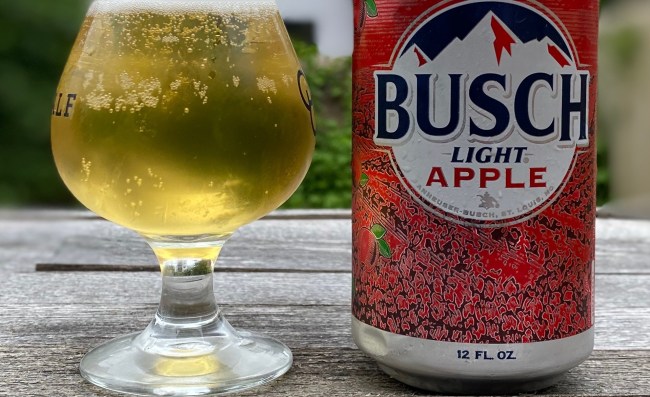 To be honest, Busch Light Apple has no business working as well as it does. I had braced myself for a cloying sweetness and an artificial flavor similar to what was whipped up by the guy who tried to imitate the taste of grapes and produced what can only be described as “purple” but it turned out to be all for naught.

Is it the most mind-blowing beer in the world? I mean, it’s apple-flavored Busch Light. What do you think? With that said, this easily surpassed my expectations and I can’t imagine any other combination of those two ingredients being much better than this. It possesses all of the essential elements of the ideal snakebite, as the apple is prominently featured but not to a point where it overpowers the other flavors that are present to remind you that you’re drinking a beer.

At 4.1% ABV, it’s certainly light and refreshing enough for the summer but it’s just asking to be consumed on one of those fall days where you can simultaneously feel the last vestiges of summer in the air along with the coolness that indicates flannel season is right around the corner. Could apple beers be the new pumpkin beers? I’d be surprised if that’s the case any time soon, but based on how well Busch Light managed to pull this off, that’s a trend I could get behind.