Exciting First Trailer For ‘Call of Duty: Modern Warfare’ – Details On What The Upcoming FPS Will And Won’t Have 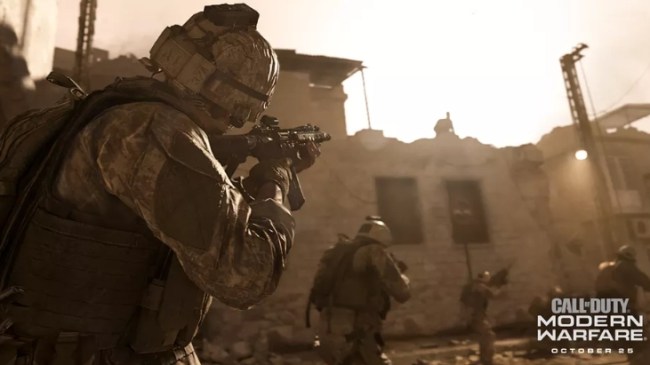 Activision relaunched Modern Warfare with a reveal trailer on Thursday afternoon, in what is the first MW video game since 2011’s Call of Duty: Modern Warfare 3. Infinity Ward said the new game is not a “remake” but rather a “reimagination” of the beloved original. The game is influenced by real-life headlines and will show the gritty and grim reality of war.

Here are some in-game shots for you, by far the best looking Call of Duty game ever.. #ModernWarfare pic.twitter.com/a5UuBSqBpk

“Every design decision has been made with our players in mind,” said Patrick Kelly, Creative Director and co-Studio Head, Infinity Ward. “With the launch of Modern Warfare, we’re taking steps to unite the community. First, we plan for Modern Warfare to be played together across PC and console through cross-play support. Second, we’re eliminating the traditional season pass, so that we can deliver more free maps and content as well as post-launch events to all players. This is just the beginning – there’s much more to come.”

The new MW is set in iconic European cities such as a terror attack in London as well as the Middle East where you’ll engage in tribal warfare. The campaign mode will have a dual-perspective of war and you serve as a Tier 1 operator and a special forces soldier, as well as a rebel freedom fighter in the Middle East.

“We are telling a story about modern war in the real world,” says Jacob Minkoff, the single-player design director. “If we whitewash it, if we backpedal from it, if we show a world where the heroes fight the terrorists and win, you never see the impact on the average person, the collateral damage, or the morally gray situations that soldiers themselves have to face.”

This trailer doesn't do it justice. I got to see it behind the scenes a few wks ago. It's a reboot. A bit slower, more tactical. Door breaching. Scary, realistic death animations. Close quarters. They're going full-edgy with the campaign. To me it felt like 'No Russian: The Game' https://t.co/UKduztzSeW

Activision wisely stepped away from the futuristic space force fighting of their recent Call of Duty games that gamers did not embrace. But returns with a lot more Captain Price.

The world of Modern Warfare was created using a completely new engine that was reportedly in development for five years by Infinity Ward. The engine utilizes photogrammetry, a technology that allows artists to scan real-world objects to create virtual approximations. This gives the game extraordinary realism since the objects in the game were scanned in from real objects.

There will be a new co-op multiplayer mode. Infinity Ward has “plans” to support cross-play for Call of Duty: Modern Warfare on PC and gaming consoles including PlayStation 4 and Xbox One.

Activision announced that the CoD: MW will not have a traditional season pass like previous years and there will be free maps and content.

Call of Duty: Modern Warfare has a release date of October 25th for PlayStation 4, Xbox One, and PC.