Charles Barkley: ‘I Might Have To Resign From TNT’ To Take LIV Golf Broadcasting Job 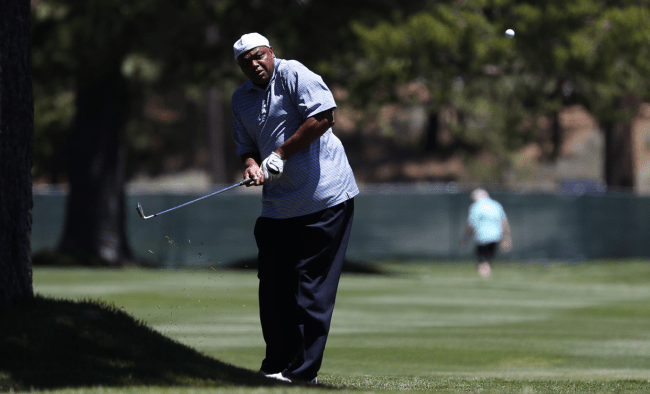 Will he or won’t he? That is the big question NBA fans have with regard to Charles Barkley and whether or not he will be leaving the NBA on TNT crew.

Earlier this week it was revealed that Barkley may leave Inside The NBA to take a new gig with the Saudi-backed LIV Golf tour.

While this was tremendous news for anyone who watches the new tour, it also made fans of the ever-popular NBA show more than a little nervous.

Barkley, who met with the the hosts of The Next Round radio show this week, didn’t do anything to quell those fears.

“When we were out with him on Tuesday night, he said ‘Greg Norman is flying in tomorrow, we’re going to have dinner and discuss a couple things,'” co-host Lance Taylor said Thursday morning.

“We met him after his dinner last night and said they had a really good conversation and Greg invited him to play in their pro-am at Trump’s course in New Jersey in two weeks, and he’s accepted.”

Charles Barkley tells us he did have dinner with Greg Norman last night and discussed joining the LIV Tour media arm and will be playing in the upcoming LIV Pro-Am with Donald Trump. @LIVGolfInv @GolfChannel @GolfDigest @GOLF_com @ClayTravis @Outkick @cjogara @RiggsBarstool pic.twitter.com/ir2JwAa4Ag

On Thursday, the New York Post confirmed Barkley will be playing in the event next week.

“I’m going to play in the Pro-Am,” Barkley told the Post.

During an interview this week with Drew Stoltz and Gary McCord on SiriusXM PGA Tour Radio, Barkley shared a little more detail about what’s happening and what’s he is thinking with regard to possibly joining LIV Golf.

“When you look at some of the numbers these guys are getting and the numbers that they’re throwing around, I would be foolish not to take the meeting,” said Barkley.

Last month, when talking about LIV Golf, Charles said with regard to that money, “For $150 million I’d kill a relative.”

As for whether or not him taking a job with LIV Golf would mean the end of his tenure as a analyst with TNT?

“I have no idea how TNT is going to respond,” said Barkley, who has three years left on his contract with the network. “I don’t even know if they’ll let me do it. I might have to resign from TNT.”